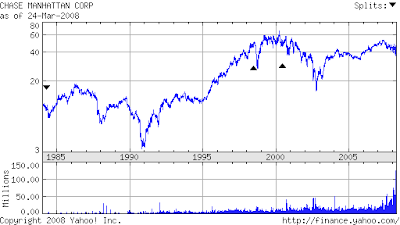 Nothing but dividends for the past decade...

Last week, it was formally announced that JP Morgan Chase would up its approximate $2 bid for Bear Stearns to near $10 a share. JPM climbed 2pts and I got short at 47.18 because well, I didn't see that as "bullish" for the stock. 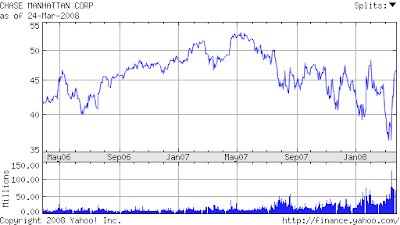 Then I got to looking at its shorter term chart and discovered an interesting pattern. JP Morgan Chase is clearly in a downtrend over the past year and its slide has been peppered with sharp, fleeting bounces. I'd classify this pattern as a short-seller's delight. What a wonderful thing it is to whack a stock and get paid so quickly!

Not even a week later and JPM is down to 42.86. It's too bad I shorted a piddling of a position.

Here is as good as place as any to update my trading travails.

Only SPG and HBC have really clobbered me - so far.

The only stocks I am long are GOOG and FMD - the latter sort of being a hedge against my rather large and growing portfolio of financial shorts.

I have been completely annihilated and thus shaken out of my Treasury market short (30 year bond). Though with the stock market melting down, gold having recently cleared $1,000 an ounce, and oil at $106 per barrel, I think it's fair to say that my End-Of-The-World Trade was for the most part intellectually correct.

So how come I am still impoverished? Well, Treasuries of all maturities exploded in the flight to "quality", er insanity. In fact so many institutional investors and worrywarts are scrambling for them that there is somewhat of a physical shortage in the marketplace. These clowns think Treasuries are safe, well, they're going to learn otherwise when government debt gaps down one day and never looks back. There's already been a panic "run" on the dollar - so a "run, to the exits", on Treasuries will be as unsurprising as the current housing crash was. T-Bills and T-Notes can easily gap down 10%-15% from these nose-bleed prices. And, as for the temporary shortage, well, our bankrupt Federal government has already pre-solved that problem with the Medicare and Social Security promises. They have already started increasing the size of weekly Treasury auctions - as they well should do at these prices.

(The only problem is, the Feds are using the added cash, and then some, to buy up toxic, distressed mortgage debt that's probably going to zero when the long bond implodes.)

The current financial panic is pretty darn scary. People are worried about the integrity of every part of the system. Is your money in the bank safe? Some people have advised moving funds to "trust banks". Are CDs safer than money markets? Do you have funds at bankrupt institutions like Washington Mutual, National City, or First Federal?

Personally, even with no equity or real estate exposure, I must say I am pretty darn scared of how this drama is going to play out. The government is in a full-blown panic, legislating, bail-out mode and we haven't even faced job losses or tax revenue declines, yet. 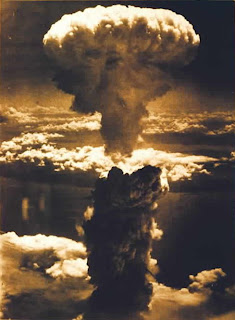 Now to cheer you up even more, MAKE SURE you watch this video of James Grant.

It's very important that y'all watch that clip. Happy dis-investing!
Posted by CaptiousNut at 8:37 AM

One other thing I wanted to mention, other than COF, have you considered shorting the credit card companies (V, MA [the chart defies everything I read about past due payments building ] amongst others)? How about commercial RE? That was supposed to be the next subprime, wasn't it?

My understanding is that V and MA don't have credit exposure as that belongs to the banks issuing the cards. Comments?

That is my vague understanding as well. However I am no fundamental analyst.

I believe a lot of credit card debt is held by individual investors (hedgies, central banks, insurance companies, and other institutions) - as it was with mortgage-backed debt.