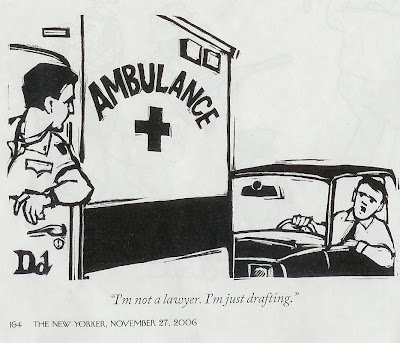 I have to give a shout-out to Ray Schmitz, an associate broker at Coldwell Banker Previews International in New York City.

What next? Are divorce lawyers going to start whipping out their business cards every time they see a couple argue in a restaurant?

I wouldn't put it past them.

This Bear Stearns thing reminds me of my own serious car accident. About nine years ago, after the car I was in was pulverized by another and wrapped around a telephone pole, I laid sprawled out, immobilized on the backseat when some lawyer reaches in, before the paramedics, and handed me his business card. I wish I kept it so I could post his info here. Furthermore, of course the guy that caused the accident admitted, later on in legal proceedings, that he met his legal counsel randomly in the hospital. SURE it was "random". They are total scumbags, the lot of these PI lawyers.

Anyway, it's a wonder that some meathead from Bear Stearns didn't reach out and punch the real estate jerk.

There's a major difference between say my harmless brand of mental schadenfreude and the in-your-face commercial variety.
Posted by CaptiousNut at 8:12 AM

That's a good story. You couldn't be more right regarding divorce lawyers. It's not just that they ambulance chase, once they get ahold of a client they fleece them dry. Just for fun check out www.DeAnnPladson.com. Pladson is a bottom feeder and acutally uses extortion in most of her divorce cases.