Look at this new show on HGTV: 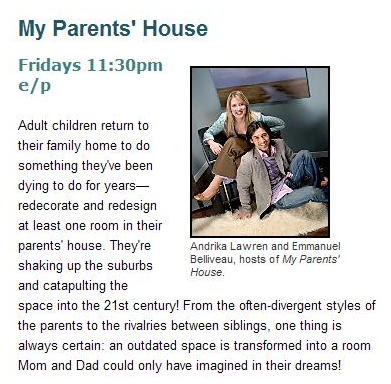 In the opinion of many people, I am a meanie. I am always mocking and Marginalizing and thus brushing off flack from weak-stomached wimps. But this blog can't possibly transmit the full gamut of my psychological omnipotence. If getting under people's skin was an Olympic event, every four years the rest of the world would be vying for the silver. I fire virtual BBs at a twit like Perry Eidelbus and my high-minded fans are taken aback. Y'all should see the nukes that I fire in person! Y'all should see me when I have a serious beef with someone. Let's just say, there were more than a few new traders in my pits that I kept from sleeping at night. One of my victims once brought his wife down to the floor (nothing any 3-digit IQ'd person would ever do) and after I was identified to her, I swear it took all her fortitude not to run over and gouge my eyes out. I was sort of the opposite of Joe Popularity. Instead of being the guy whose affection everyone sought, I am a guy whose dis-affection no one relishes. Even guys who hated my guts would choose me for their pick-up basketball team; they just didn't want to play AGAINST me.

Anyway, I can be whatever the situation dictates. I can be the malicious Marginalizer or I can be the benevolent one. Like most psychopaths, I have convinced myself that my methods are truly in everyone else's best interest; my antics behoove the greater good. 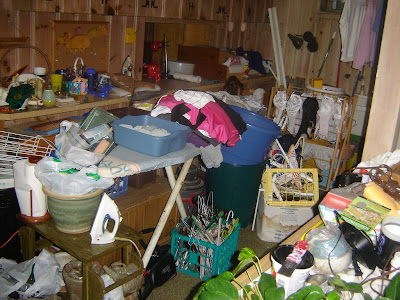 For example, look at the "before" and "after" pics of a family member's cluttered basement. Now, I can't claim full responsibility for this particular triumph as there were multiple interventionists, nonetheless, I like to think posting the "before" pic on my blog played some small part in the (partial) de-cluttering - not to mention the months of in-person ribbing included in my service.

Is it cruel to put up a "Hurricane Katrina" pic of a dear relative's basement on the World Wide Web?

Well, what if it impels them reform? 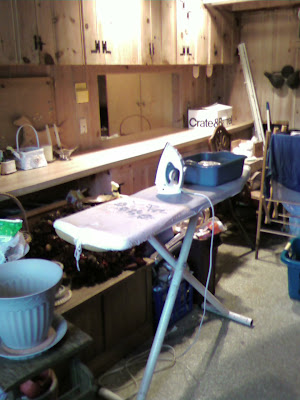 Believe me, I have better things to do than mock Perry Eidelbus. But I am morally compelled to show him this tough love. Look at it this way, if someone else had smacked him down to size years ago, I would be relieved of the task. So who really is the virtuous one? I submit that it ain't any of those weak-stomached wimps who've given Perry a pass all his life. Those anti-interventionist buck-passers unwittingly let him grow into the animal insect that he is today. He's a very bright kid who will one day be thanking me for setting him straight. By the way, I am pretty sure he tattled on my last post to Google (owner of Blogger.com).

So, what about my methods?

As a youth, I used to whip my older brother's ass at ping pong. After a while I couldn't get him to play with me at all which really sucked. He said that he didn't mind losing to me, he just didn't like the "supercilious" or "hectoring" manner in which I beat him.

Now, did my brother learn from my domineering, smash-the-ball-so-it-bounces-off-his-face, ping pong lessons? Did it inspire him to concentrate and become a better player? Of course not. He threw a hammer at me - just missing my precious dome. In fact, he once pushed me down an empty man hole. Another time he pummeled my head with a sizable log. And when my head is shaved you can see at least a third scar on my scalp that memorializes our fraternal rapport. These all weren't post-ping pong incidents but they shed a little light into the upbringing that shaped my Marginalizing methodology

We were four kids raised in 1,200 square foot house. There were only five years from oldest to youngest; we fought a lot and teased even more. No one was immune. My thick skin was surely environmentally wrought. Admittedly, one of my biggest character flaws is that I too often presume others to be equally insensitive to goading, ribbing, and outbursts of brutal honesty.

To all my style critics out there I say, "Hey, you should have seen my immature antics a couple of years ago....I AM MAKING PROGRESS."

Another thing about me is, if y'all didn't figure it out by now, I've always got a rejoinder, or three, ready to fire back at a moment's notice. 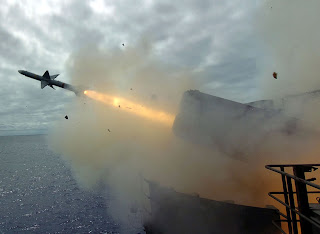 Lastly, there's an expression that goes like this, "If you put the poop out in front of them....they'll [Morons] always step in it." Well, when it comes to Perry Eidelbus, it seems you can put the poop ten miles away from him, send in in the opposite direction, blindfolded, and he'll still end up walking on it.

I have a nice little post on him raring to go, but in the spirit of Easter and my "progress"....I won't post it until next week.
Posted by CaptiousNut at 7:09 AM