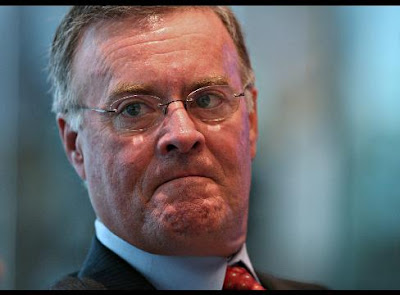 Ken Lewis, that Moron that runs Bank Of America Corp, said the other day that the pending Countrywide deal remains:

"...a compelling financial transaction." Lewis added that, "nothing has happened that is out of the boundaries we contemplated when we did the deal."

The entire financial world KNOWS that Countrywide is a $20-$50 billion dollar losing timebomb, yet Lewis won't back out.

He first invested ($2 billion) when the stock was $18 - today it is $5 a share. To say that nothing happened that he didn't expect is to, well, say nothing at all. He doesn't get paid based on the theoretical probability distributions buzzing in his head; his job is a performance-based one.

Furthermore, I call BS on Kenny's claim to have foreseen ALL scenarios. As evidence I will use the Moron's own words against him from December 2007:

"We're seeing people who are current on their credit cards but are defaulting on their mortgages," Mr. Lewis says. "I'm astonished that people would walk away from their homes."

Of course, nobody with any clout is holding Ken Lewis to his words - so he can very well say and do whatever the heck he wants. More on that in a minute.

Right now, everyone with a functioning brain is pulling their hair out trying to figure out why Bank of America won't:

So why is Kenneth walking into one of the dumbest business transactions in the history of humanity?

Well, I hinted at it above. Ideally, a board of directors would rein in a renegade CEO - if not fire him. But I suppose his board is crony- and Moron- riddled. 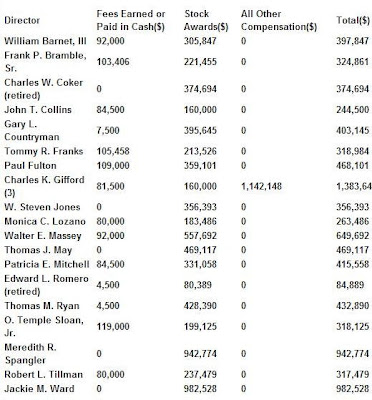 If you need to, click the chart to enlarge.

Note first, that the BoA highlights the number of independent directors. "We have a substantial majority of Independent Directors. Thirteen out of the seventeen director nominees are independent as defined by the New York Stock Exchange Listing Standards, the Sarbanes-Oxley Act and our Director Independence Categorical Standards". The proxy statement then notes that the board of directors has "affirmatively determined, upon the recommendation of the Corporate Governance Committee," that the following directors are independent:

In other words, Spangler and Ward are paid almost $1 million and they are treated as independent directors. Spangler, by the way, serves on the compensation committee and the corporate governance (i.e. nominating) committee; Ward She has been a director of the Corporation since 1994 and is chair of the Asset Quality Committee (a committee that reviews asset quality, credit risk policies, and reserves). She also serves as a director of Equifax, Inc., Flowers Industries, Inc., Sanmina-SCI Corporation, SYSCO Corporation and Wellpoint, Inc. By the way, Gifford, who made more than $1.3 million did not qualify as independent. It was not the amount of income that disqualified him but the fact that he had been "employed by Bank of America or a predecessor within a three-year period." 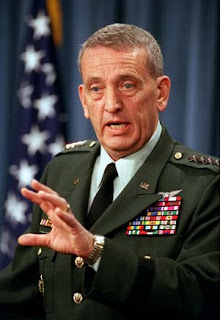 Note that this is a report from 2006; I am sure there have been a few changes.

BUT, with all the zeroes in the "total compensation" column, the fact remains that board membership is a politically-acquired sinecure - a well paid one at that. While it may have some marketability, I highly doubt that General Tommy Franks has the financial acumen to advise Ken Lewis on the perils of HELOCS and subprime lending.

Go google some of these people. They are all crony executives - mostly retired. Many of them are hardcore in their support for socialist politicians as well. This could explain the thrust of my prior post Bank Of America's Ken Lewis - Socialist Hero, Shareholder Villain.

Here's another list of directors that appears to be more recent: 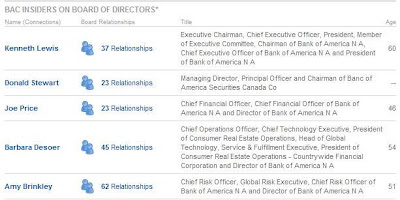 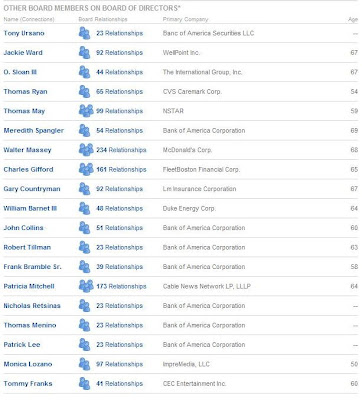 One independent director of note is Thomas Menino. He's actually the mayor of Boston - not to mention a complete Moron - go to MumblesMenino to hear the idiot talk.

Clearly he's a token political appointee to BAC's board. The Bank took heat from the local communist establishment when they acquired Fleet Bank. The Boston echo-chamber bellowed "Bank of America is moving jobs out of Massachusetts..." so Ken Lewis paid off the extortionists by spending tens of millions (if not more) to move most of the brokerage and wealth management headquarters to 100 Federal Street in Boston. In the process, Bank of America lost gobs of talent and truckloads of money - all in an overture to gain the goodwill of Barney Frank and the Boston Globe (which, incidentally, no one reads anymore).

Again, like the retired General, a guy like Thomas Menino hasn't the brainpower to grill Ken Lewis over things like buying a bankrupt subprime lender. Yet guys like these constitute the "independent" vanguards of shareholder interests.

Also note how old these 'coots' are - eyeballing it, clearly the average age of the directors is in the 60s. One thing I have noticed over the past few years is how rare it is to find someone over the age of 60 that understands housing prices in the slightest. The reasons could be manifold - in particular, most old farts bought their homes years ago at lower prices; they all think they made out like bandits; but what they don't do is factor in all the "upkeep" or the "interest" they paid along the way. Furthermore, the killing that they think they made wouldn't look so good if they compared their housing investment to a stock or bond market one of similar duration.

Ah, maybe I am over-analyzing - 'Old coots' simply aren't that sharp - on just about anything!

As I type this, BAC is trading at $31.98 a share. Not only does that represent a five-year low, the stock actually traded higher in 1998, A DECADE AGO! (not visible on this chart).

So how long can a board of directors tolerate a CEO whose stock is an a multi-year rut?

I am no fan of class action attorneys, but if anyone deserves to be sued, I nominate Ken Lewis's cronies on the board.

By the way, if you want to check the political contributions of somebody, I found a great site - go to newsmeat.com.

As an example, click here top see whom board member Charles Gifford donates to. 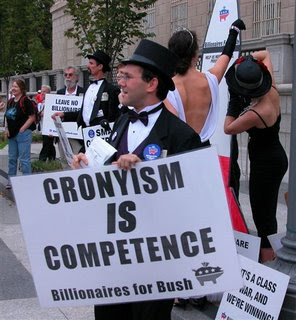 The idea today that one particular political party is in the pocket of Big Business is an complete myth - and a modicum of research would prove it.
Posted by CaptiousNut at 5:31 AM

Who knows where to download XRumer 5.0 Palladium?
Help, please. All recommend this program to effectively advertise on the Internet, this is the best program!