Holier Than Thou - Marginalizing Extreme Moderates 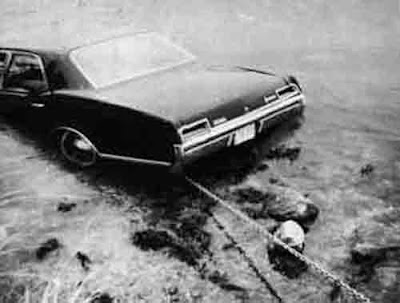 On the subject of Ted Kennedy Cancer Schadenfreude....I was completely taken aback by the level of sympathy expressed for the drunkin' murderin' socialist by people I would have assumed thought otherwise.

From Michelle Malkin's blog - here I just pulled the first few comments which really sum up the entire 300 post thread: 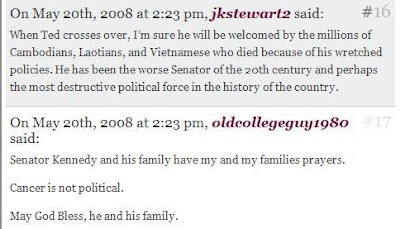 Actually, the first comment above was a complete aberration. Most of the comments in Malkin's post were *sympathetic* and *holier than thou*. I was downright shocked.

Ted Kennedy is and was one of the most vile human beings of his generation.

Anyone grieving his long-overdue demise is bereft of logic, innocent of his record, or mathematically illiterate.

For decades Ted Kennedy has dehumanized and weakened the most benevolent country on this over-heated planet. He's pitted race against race, class against class, and transformed the government into an intractable leviathan. You see his MO was quite simple:

Much of the sympathy expressed for Teddy from his non-admirers went like this, "Don't celebrate his death because then you are just like those creeps who celebrated Dick Cheney's health issues (or when he accidentally shot someone)."

Or, "Don't celebrate Teddy's cancer because then you are no different than him - someone who doesn't value and cherish human life."

Okay, let's get one thing straight. Ted Kennedy is not a human being. He is a type.

More than a few times, socialist politicians have been embroiled in scandals (e.g. Monica Lewinsky) and their constituents have bleated, "It's his personal life - It's a family issue - It's not relevant - Stick to the issues". And no doubt, many of the same commenters on Michelle Malkin's blog would be screaming, "No wait, it is relevant - It reflects poorly on his character - It raises all sorts of integrity/honesty issues..."

So, to these cancer-sympathetic Malkin-ites I say, "Well, I hated Teddy's guts before the good news broke, and I am not about to change my assessment based on some *personal life* event of his."

Put aside your political differences and join me in keeping Sen. Ted Kennedy and his family in your prayers as they grapple with the news of his malignant brain tumor diagnosis.

Well, I agree that cancer is not "political" - it is simply a disease of bodily cell reproduction. On the other hand, I would never euphemize Teddy's legacy as "political". I would never refer to killing the unborn, destroying the family institution, neutering free enterprise, and weakening the most benevolent nation on Earth as "politics". Ted's legacy is one of atrocity.

I don't worry about *looking* like assorted other wackos because I am certain that I'm so far removed from their ilk - any comparison would be a joke.

Ted is not *stricken with cancer*, he's stricken with old age. At 77 people die quite often. It's more a wonder that his liver didn't go sooner. He should be thanking God for his extended lease on life, if anything.

Now there were a few bursts of levity on Malkin's thread. See above - and click to enlarge the pics if needed. As for the "wind farm" reference, see my prior post.

This whole cancer schadenfreude thing reminds me of an incident from "The Lakes" - the golf course in South Philadelphia at least a dozen years ago.

I was playing the sixth hole with one 'old coot' who hooked his ball off the tee. Allegedly, the 'old coots' coming up seven pocketed his ball. They were accused by my whack-job partner, denied it, and nonetheless cursed:

As much as I agree with your (lack of) sentiments concerning Ted Kennedy, I feel it necessary to point out the single most communist thing you've ever put up on this blog which you've represented as a belief you hold:

Okay, let's get one thing straight. Ted Kennedy is not a human being. He is a type.

Ted Kennedy was a human being, albeit a deeply flawed and I'd even say evil one. I celebrate his eventual demise because of the deeply ingrained flaws and evilness that will be gone with the extinguishing of his all-too-human spirit.

A quick, remorseless death is what I wish upon all tyrants and usurpers like Ted Kennedy. What fool would wish good health and longevity to a person whose life goal is to restrain and control them, and to kill them if necessary in the successful pursuit of that goal?

Teddy is a *type* in the sense that when he's gone, another class-baiting scumbag will just fill his shoes.

OTOH, when I die, nobody will ever be able to fill my shoes.

My demise will be a tragic, dead-weight loss to mankind.

Here is another Massachusettsian perspective on Ted: