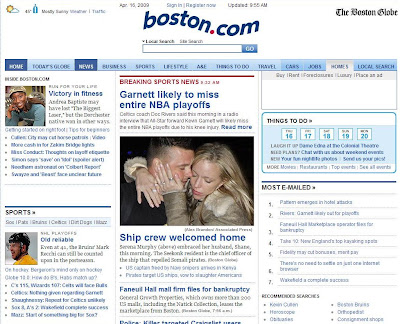 Just as I presumed, there would be no mention of the nationwide *Tea Party* demonstrations in the Boston Globe. Above is a screen shot of the front page which however had the space to mention stabbings, sports, weather, American Idol, and ketchup theft.

I checked the *News* section as well and found nothing.

Supposedly 2,000 people rallied on the Boston Common to express disgust with Washington DC. And locally it could only be read about in the Boston Herald. 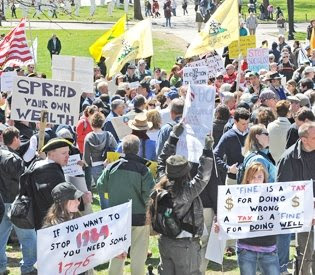 I do think the protests were a waste of time and energy - but they are still *news* worth reporting.

And the Boston Globe still thinks the *internet* is what did them in as opposed to unions and partisanship!

See also - The New York Times And Its Suicide Fart.
Posted by CaptiousNut at 9:54 AM