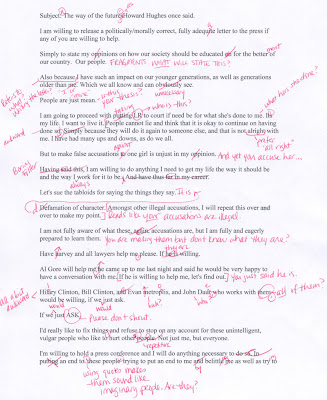 So I just finished John Holt's book Learning All The Time. He was a famous educator and author - who can probably best be described as an advocate of *unschooling*. Check out his Wikipedia entry.

Unschooling is a hands-off approach; let the kids learn WHATEVER and WHENEVER they want to learn. And it can be punctuated by an extreme lack of criticism.

For example, what that means is when a child is reading and mispronounces a word, the adult mustn't correct them. The theory being that *corrections* damage the self-esteem and learning enthusiasm of tender brats; that the kids will in due time correct themselves anyway....with precious egos intact!

Although I found much of the book interesting and somewhat enlightening, this is where I part ways with John Holt - as y'all would expect any CaptiousNut to do so. (Look up captious if you haven't already.)

We are fooling ourselves if we think that by being nice about it we can prevent corrections from sounding like reproofs. It is only in exceptional circumstances and with the greatest tact that you can correct an adult without to some degree hurting his feelings. How can we suppose that children, whose sense of identity or ego or self-esteem is so much weaker, can accept correction equably? I would say that in ninety-nine cases out of one hundred, any child will take correction as a kind of reproof, and this matter how enthusiastic, pleasant, relaxed, or stimulating we may happen to be. I am ready to be about as dogmatic about this as about anything I know of; I have seen it too often with my own eyes.

On one premise - that the supermajority of today's adults are incorrigible and insecure when rudely confronted with facts - I couldn't agree more. Over two years ago I learned this and disabused myself of the fanciful notion that I was EVER going to truly convince ANYONE of ANYTHING. Whew! How liberating to be rid of that potential burden!

But I contend that grown-ups are so obtuse in fact because of their pronounced under-education. Most people are lapsed-learners and are *fronting*. That's why they react with such discomfort to trenchant intrusions.

But in my view, children have a whole lot less ego at stake. I just don't see them as more emotionally unable to deal with realizations of personal ignorance (and *shame*) that might be provoked by *corrections*.

That entire quote sheds some light on Mr. John Holt. He's *as dogmatic about this as anything* so he's essentially going all-in on the kid-glove treatment.

I understand he's done more work in the field - and seen far more children than I have.

But right now I have to stand opposed.

I would almost take it as a personal insult if a friend, family member, or teacher of mine allowed me to make a repeated mistake without correcting me. For my feelings?

How compassionate is it to let someone embarrass or harm himself, again and again, when you could have prevented it?

I've been a self-taught golfer for 20 years now. Some of the things I recently learned; some of the mistakes I've recently diagnosed were surely pointed out to Tiger Woods and Jack Nicklaus when they were 5 and 6 years old by well-paid professional instructors. Sure I'm a decent single-digit handicap player today but that's only because I've spent an inordinate amount of effort and energy on my game. I could have been a much better player - so much sooner if the right people had BOTHERED me with helpful advice.

Then if you look at my father and his horrible golf game....

He too is an auto-didact in this endeavor - only with a horrible teacher and a worse student!

He really thinks he enjoys the game notwithstanding his 3 digit scores and constant cursing. On some level he may be right. But that doesn't change the fact that if he stopped flipping his hands throughout EVERY swing, his scores would drop and his enjoyment would rise to inexperienced levels. But go ahead and try to get him to change something; this 'old coot' insists that *practice* actually makes him play worse!

Do you think a sensitive 8 year old could concoct such a ridiculous excuse?

The same goes for trading. It took me a full ten years of *fighting the tape* to grasp the reality that I should be playing momentum. In fact I still might not have even fully digested this truth that none of my bosses or colleagues have ever taught me. Compare that with the pedigree of one Michael Davey. (click the link)

The fact is, instruction, including FEEDBACK and CORRECTION, matters greatly because it sets learning curve trajectories.

And the kid-glove treatment can turn humans into mice!

Though I'm not convinced John Holt is totally wrong. I'm going to have to contemplate his theses some more.