This week on Hell's Kitchen, Matt, surely one of God's queerest creations, chopped off the tip of his finger while preparing a dish. Fast forward to around the 5:15 mark of the video to witness the amputation.

Then, about a minute later they go a-scrambling to find the severed fingertip.

Chef Ramsay - Where's the top of the finger gone?

Corey - We need to find his finger.

Roseann - I don't know where it is.

Roseann - I have no idea.

Unknown - I am not seeing anything there.

Unknown - Check in the pancetta he was cutting.

Christina - We just cooked Matty's finger. I might lose it. I am serious. 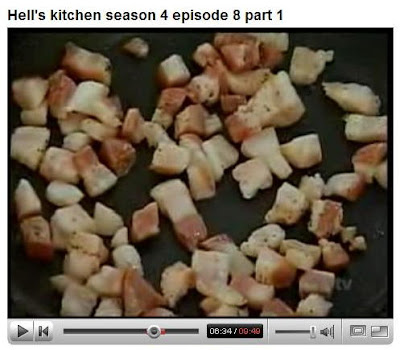 Pancetta is a pain in the arse to cut. I used to order "chunks" of it, say a half an inch thick at the deli, but now I make them slice it thin to facilitate my own chopping. I am sure my fingertips appreciate the gesture.

By the way, Matt has got to be one of the dumbest people ever to last this long on a reality show. Later on in this week's show, he messed up badly and got excoriated by Chef Ramsay. Five seconds later he says to his team,

"Let's wake up everybody!!! Especially me."
Posted by CaptiousNut at 10:44 AM

Thank you for the tip on pancetta. I am a bit of a klutz due to eye problems but trying to learn all I can culinary-wise. All finger-saving strategies are appreciated. :-)