One of my foundering shorts is HSBC Holdings. I shorted it practically at its recent low - near $71 a share. Today it is trading at $86.

Thanks to Citigroup's recent demise (From $50 to $24 a share), HSBC is now the largest bank in the world. Like all banks, it's having problems with mortgages and collateralized debt in the United States BUT, it is allegedly in the sweet spot of the booming Asian markets.

If you think Asia, particularly China, is in an investment bubble then shorting HSBC would be a good play on that. In that case, buy some January puts as the stock is high and the options are relatively cheap, IMO.

Like all of today's big banks, HSBC is too big, too unwieldy to manage. Even though they've already written down $27 billion in the past couple of years, they simply have to have more toxic debt on the books. I expect them to float more stock, preferred, convertible, or otherwise dilutive. And I expect that once the Asian profits inevitably fade, a more honest picture of their balance sheet will emerge.

Most likely, in a couple of years, these Asian profits will be similarly written down and proven just as sham as the "profits" originally booked on US mortgages. 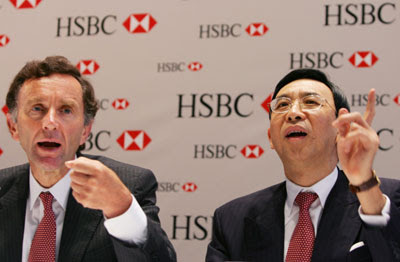 Anecdote - 1.5 years ago my wife was almost poached by HSBC. Pretty much the job was hers if she wanted it but for the details of a sufficient raise and our willingness to relocate (yet again) back to New York. Mrs. C-Nut was turned off by the "imbeciles" who constituted senior management. She said the firm was "European" and didn't believe in "firing people". She said there was "furniture" all over the bank earning sh*tloads of money who managers had to just "work around". My wife also didn't like the antiquity of HSBC's processes. She said they did all sorts of important, complicated calculations "manually", i.e. on spreadsheets instead of using refined code-written algorithms. In this case, the grass wasn't any greener - my wife was coincidentally promoted at her current firm and we stayed put in the worst state of the union.

UPDATE - Investor says HSBC undervalued loss by $30bn
Posted by CaptiousNut at 7:16 AM