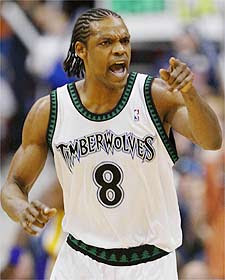 NBA baller Latrell Sprewell just had his house foreclosed (his boat too!)

This is the same Moron who choked and swung at his coach in 1997, meriting a year-long suspension. (without pay!)

Then, as Wikipedia tells the tale:

On October 31, 2004, the Minnesota Timberwolves offered Sprewell a 3-year, $21 million contract extension, substantially less than what his then-current contract paid him. Insulted, he publicly vented his outrage, declaring, "I have a family to feed."

After turning down that insulting offer, he never earned another penny in the league.

I wonder how many former pro-athletes are positively broke?