$90 Jeans and Morphing Into My Father 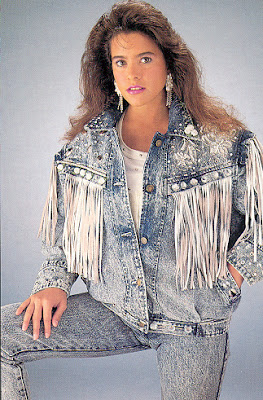 It's come to my attention that, when judged from the parochial standpoint of 2007, my wardrobe is deficient in style.

My friends and family have started to bust on me for everything from my shoes to my pants to my shirts to my jackets. I take it all in stride.

When one is as perfect as me, others are just itching to bring you down in whatever small-minded way they can. Can you say "insecurity"? I have been dealing with the externalities of my perfection for decades so I can handle it.

At the focal point of their mockery are my jeans. Even my wife has sheepishly piled on. Everyone has started denouncing my jeans as "acid washed", "stone washed", or "from the 80s/early 90s".

They absolutely are not. I bought all of my jeans at Old Navy, on Flatbush Ave, in Brooklyn less than four years ago. They were $17 a pair. Having paid $32 a pair for God-awful Levi's back in the 1980s, I considered $17 in early-2004 a coup. Thank you China!

I could see if I were wearing Wranglers, Lee jeans, or something more antiquated like Levi's, but Old Navy, I thought I was somewhat hip.

After some meticulous surveillance, I have discovered that dark blue jeans are all anyone wears these days. When did this happen? So maybe my jeans are of a lighter hue - they certainly aren't "out" if they are only 4 years old, are they?

Looking at my brother-in-law's apparently hipper, dark jeans I asked him how much they cost. He said $90. My jaw dropped.

Furthermore, he started justifying, "If I get two years out of these jeans, then $90 isn't so expensive..."

What? Two years? I have had mine for four years already and they only cost $17 to begin with.

I thought the whole point of jeans was that they were comfortable, they last forever, and heck you can paint in them. When did jeans become a fashion statement?

For the sake of argument, say that I am O-U-T; that everything I wear is one big wardrobe malfunction. So what?

I work from home. I hardly leave the house AT ALL. I am not trying to impress broads at the bar anymore. In short, my clothing is a purely functional enterprise. Should I buy $90 jeans and sit in them at home all day? Wear them while I am toting two nose-running, regurgitating, diaper-leaking kids with chocolate-covered hands? 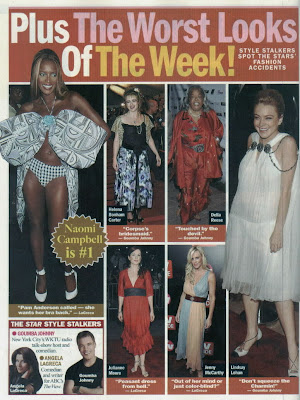 Right now I am sitting here in sweat pants and wearing an old Structure golf shirt that has to be from the 1990s. Should I dress up for my baby-sitter - an obese, disheveled lesbian? (Ponder, for a moment, why my wife was so excited to hire her - instead of shapely, kempt, breeder - to come to my house everyday.) Also, it's a good thing I didn't write this post yesterday because I wore my parachute pants and a slightly faded denim shirt - a combo that might not have buttressed my arguments.

The peanut gallery, my wife included, have deemed the above explanations as "excuses". They are not excuses. I have provided an accurate description of the parameters that shape my clothing purchases - yet the gallery doesn't want to hear it; in their minds I minimally look like a clown, and at worst, I am turning into one of those dads.

Yes, I admit it. I have morphed into my father. As a child, I couldn't take how "OUT" his wardrobe was. His goofy shirts, big glasses, and funky mustache were just more reasons to fear parentally-induced embarrassment. Whenever he arrived to pick me up at school, it was a mad race to make sure I was ready and on my way to the parking lot - lest he (or my mother) exit the vehicle and make themselves visible to my peers. I don't care what anybody says, if the kids at school discover you have parents...your social life is OVER.

As bad as my father dressed back in the 80s and 90s, he is seemingly much worse today. He wears ironed, logo T-shirts out in public and to social gatherings. All he needs is the fanny pack and random strangers will start calling him Clark Griswold from National Lampoon's Vacation. He just has an uncanny knack for always wearing the wrong clothes.

Is this what the future holds for me? Am I sliding down the slippery slope of wardrobe malfunction? Will I embarrass the sh*t out of my kids too?

The fact is, there are other scary signs of similarity between my aging self and my father. Nowadays, just like him, I don't sleep more than a few hours a night. I wake up several times and wander around the house, investigating noises, adjusting thermostats, going to the bathroom, etc. My knees and joints are creaking all the time, just as I remember his did when I was a child. There have been a few other manifestations of morphing as well - like how I have to rip boxes up into minute little pieces before dumping them in the trash, just like my father. Though thankfully, I haven't yet inherited his crepuscular flatulence.

Late last night, after using superglue to repair my two torn sets of flip-flops I asked my wife if she needed anything glued, as the glue was about to be tossed. She was eerily silent. Why was she ignoring me?

Then I chuckled and told her that I felt like I was her dad (God rest his soul) who used to have a dozen or so pairs of running shoes that he repaired/re-soled all the time with glue.

She turned around and looked at me gravely,

Haha. Maybe I should go on a show like Extreme Makeover - Wardrobe Edition.

Or maybe I should contact Elliot Yamin's image consultant. I can't believe how they polished up this ugly toad. If only they could do for my clothes what they did for his teeth...

Then again, I'd require the same $0 price that he got.
Posted by CaptiousNut at 1:21 PM

omg, so much juicy info about C-Nut in here I wouldn't even know where to begin, so I won't. But I will say this, "when did jeans become a fashion statement," come on, seriously? Did you miss the whole Eastern-European-youths-wearing-jeans-as-a-statement-against-their-Commie-overlords movement back in the 1980s? Why do you think they chose jeans to make that statement?

Did you miss one of the recent Office episodes where Michael said he used to have a kid from Yugoslavia that lived with his family when he was younger, and he called him brother, until his "brother" returned to Yugoslavia with all of Michael's jeans and he had to spend the winter in shorts?! That was such a brilliant tie-in to historical pop-trivia.

And no, Old Navy is NOT hip... it's cheap! That's why I've shopped there in the past (I'm sure you know it's owned by GAP)

I loved this: "Wear them while I am toting two nose-running, regurgitating, diaper-leaking kids with chocolate-covered hands?"

You noticed that too? WHY ARE THEIR HANDS ALWAYS COVERED IN CHOCOLATE?!

I thought they chose jeans to make a fashion statement because, one, they couldn't get them, and two, because jeans are practical attire for work-at-home-dads.

I did see that Office episode and remember the line.

Chocolate is needed on top of their vegetables - otherwise they won't eat.

About the jeans-- I think you're right that those are some other reasons why anyone might wear jeans, but the Eastern Euro kids of the 80s wore them specifically as a statement because jeans represented the non-Communist West, specifically America. Jeans were, after all, invented in America.

I think in a lot of ways, a lot of oppressed people all over the world have turned to jeans as a way of making a statement and perhaps actively living the Western life they desire.