Has A Tree Ever Fallen On A Golfer? 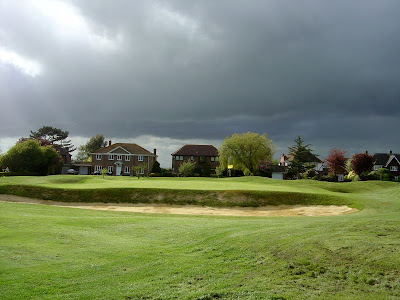 I got up at 5am this morning, did my exercises, cooked breakfast, showered, put on five layers of clothes and drove the 8 miles or so down to my new home golf course for an early tee time.

The forecast for today was a low temperature of 37 and a high of 43 degrees, 40-50 mph winds, and a 100% chance of rain. The periphery of tropical storm Noel was due to hit the Boston area.

Only it's not going to hit until at least noon.

And hold off it did, so far anyway. This morning temperatures were between 45 and 50 degrees, the wind was only blowing around 15-20mph, and there wasn't a drop of rain yet.

So at 7am, I was sitting in the parking lot, reading a Forbes magazine, when my playing partner pulled up. Yesterday I had told him "Saturday will be a test of golf manhood" and by showing up he passed section one of the exam. We were driving the cart up to the clubhouse and I giggled that I hadn't had a round rained out all year. It's been truly amazing; we beat the rain last week and were going to sneak another wonderful round on a wide open course.

Then the bad news came. The golf attendant was on the phone with her boss. They weren't going to let us play. We pleaded, reassured them we would be done in two hours but it was to no avail. They said we could go out and walk nine but weren't allowed to take a cart.

The boss/owner said, "With the forecasted 45-50 mph winds, I am afraid a tree will fall on them...No carts. They can walk nine if they want."

Now we are pissed. It's okay to go out and walk the course and brave falling trees but for some reason we are more at risk riding in a cart?

What, do falling trees aim for riding golfers?

How do you respond to such asinine reasoning?

And how the hell is a tree going to fall on me considering that I play every second shot from the middle of the fairway?

Two years ago, I would've gone ape sh*t over this but alas, I am slowing getting inured to this Massachusetts bovine excrement. The course is quasi-municipal. The manager/owner doesn't care about revenue or common sense. Like every other bureaucratic, socialist clown up here he's worried about fantastic anomalies - falling trees and the like. Again, I submit to y'all that "legal liability" is hardly ever a legitimate excuse to cover one's ass - rather it's almost always a weak attempt to cover an empty skull.

Remember, this is the state that in parts has banned tag at recess, banned fluffernutter sandwiches, banned stressful honor rolls, cancelled football games for fear of mosquitoes, won't sell alcohol to 40 year-olds with out-of-state driver's licenses at Celtics games, and has authored innumerable more absurdities.

On the way out of the parking lot my buddy exclaimed that they should at least have given us a pass or comp for our next round. Now THAT was funny. This is Boston. This is essentially a municipal course whose only competition for golfers is one other municipal course (South Shore CC). There are really no privately owned (open to the public) courses in this area; hence a competitive, free, market for golfers doesn't exist. Customer service is a laughable concept where there's no consumer choice.

For sure, if we didn't show up and the course was playable - they'd have zinged my credit card for two greens fees. So in that vein, yes, they really should have comped our next round. 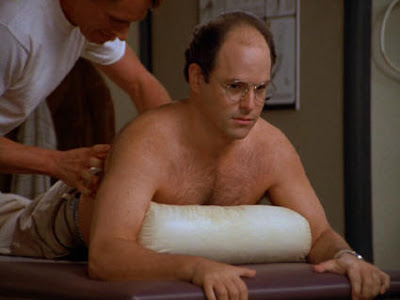 This reminds me of that Seinfeld episode where George, after having been charged for a lately cancelled doctor's appointment, got pissed at the doctor because she subsquently cancelled on him at the last minute of his next visit.

George triumphantly declared that he had a policy requiring 24 hours notice to be cancelled on.

Can someone tell me what episode that was from? I am going nuts trying to remember.

By the way, how many of you jokers can get up at 5am on Saturday with a mere four hours of sleep?

My mind and body are such finely tuned machines that they never need to rest!

(cross-posted on Marginalizing Hackers)
Posted by CaptiousNut at 10:19 AM