I just received this email from one of my original, most indefatigable readers.

Do you think that this latest China-made , Aqua-Dots recall will destroy the over-priced, junk-plastic toy habit for the more-money- than-brains crowd who get up at 3am every Fri. after Thanksgiving to run out to be first in line to purchase Toxic Crap ?????? 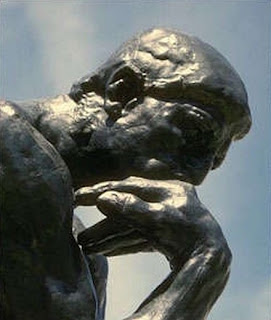 My answer is an unequivocal "NO".

First of all, the Chinese/Asian toys are so much cheaper AND better made than the "mom and pop" American-manufactured toys.

For example, those Hot Wheels cars (made in China) are indestructible. I have stepped on them a hundred times without injury (to the cars). But whenever we get some little collectible, American-made car, my baby daughter can chew the wheels off and furthermore, they don't survive one of my son's simulated "crashes".

Some toys are a profound rip-off, like Thomas the Tank and his $200 train set. Go into Barnes&Noble and you'll see that an 8-piece expansion set is $40. Forty-freaking bucks!

Another jam-job are Lincoln Logs. Everyone wants to get them for their kids because they themselves grew up with them. They were an original American-made toy that is now owned by Hasbro. I don't know if they are still made in the States but they are certainly priced that way. I recently spent $18 for a small set that only has enough pieces to build a cabin as big as an outhouse. Luckily, most of our cluttering relatives save these types of things and young parents can usually procure an old set from someone. (Yard sales by grandchildren-less clutterers are also an option.)

I am not really an expert on toys. My kids have about 10% the amount that their peers have and most of what we do have comes from birthdays, Christmas, yard sales, and doting relatives. In fact when we moved this summer, my wife and I left an enormous box (big enough to house about 3 Rosie O'Donnell's) of toys in the storage shed. We figured we'd pull them out as novelties for rainy days. But it turns out we haven't even had to break them out. As everyone knows, we can all get by with so much less in the way of possessions.

I don't know anything about this "Aqua-Dots" recall but I am sure it is terrorizing all the stay-at-home parents who have time (and mental deficit) enough to watch Oprah and The Today Show. Having your thoughts dominated by the current news cycle is, as far as I am concerned, modern day serfdom. Turn off your Asian-made television and emancipate your minds!

Those old toys were expensive and dangerous in their own right. Look at this metallic truck my son commandeered from his nostalgic grandmother's garage. 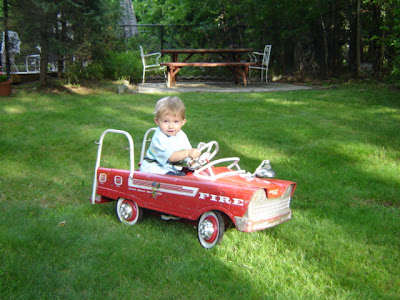 It's heavy, rusty, and has sharp edges. My son fell and split his lip badly on one of those white bars. This would have never happened on a cheap, plastic Chinese toy car of 2007. Not to mention, do you realize how hard it is for the father to lift and maneuver this relic?

Now here is my son on some foreign-made, cheap-as-sh*t, electric tractor. He's only two years old and it is at least as safe for him to be zipping around in this thing - sometimes with his baby sister clutching his arm - and braving the 12 foot drop-off from my yard than for him to be playing with breakable, expensive, American-made toys.

Note that I am, once again, flouting child labor laws.

Young people today shouldn't be complaining about a China that's drastically eased the strain of parenthood with innovative, cheap products; we should be complaining that our parents smoked in front of us, had us sit on a sibling's lap instead of securing us in a car seat, painted our rooms with lead, and made us eat canned vegetables!
Posted by CaptiousNut at 11:34 AM

Hoooooooooeeeeee! If that ain't a rush, blowin' around the yard with a bed full of leaves. Make that boy work for his inheritance, C, it'll taste all the sweeter to him for his troubles.

Reminds me of my youth, when I received a Corvette Power Wheels electric car... you couldn't stop me from drag racing down the sidewalk if you had tried.

What inheritance? I intend to die with nary a penny in my pocket.

That won't be a tragedy, it'll be "perfect timing".

I had to watch that clip twice because it really did take me back to childhood. I noticed the way your boy literally "steps on it" to make it go. Something about the binary nature of the "gas" pedal on these toys that leads me to believe they give children a false idea of how to safely operate a vehicle.

Heheheh, that's so cool. Flout those labor laws, just don't be surprised if some gummy, nosy socialist comes along your video, misses the humor and forwards the link to Child Protective Services and you lose custody of your kid. Seems like a fairytale but the stuff I've been reading lately make me realize more and more everyday that the old McDonalds' advertising slogan of "McWorld-- Hey, it could happen!" isn't so far off from, "ThisWorld-- Hey, it does happen!"