All you hear and read about today is the "subprime crisis", the "subprime contagion", the "fallout from subprime lending", etc. Seemingly every day another financial institution announces another new billion dollar writedown on collateralized debt. Today it was Barclay's $2.67 billion. Yesterday it was Bear Stearns $1.2 billion. Tuesday we had Bank of America and HSBC writing down $3 billion and $3.4 billion respectively. I imagine that if I were still in a trading pit we'd have a little gambling pool on which firm will be next to announce another writedown.

Don't worry, writedowns are only an accounting event (sure!). Cash flow is still strong enough to fund operations. And, my favorite, "the worst is behind us". That is unless you are say, GreenPoint Mortgage. 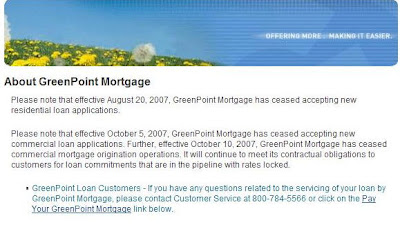 That is the front page notice on its website. It says, "Please note that effective August 20, 2007, GreenPoint Mortgage has ceased accepting new residential loan applications...."

For Greenpoint and every other lender, real estate agency, mortgage broker, etc. the BEST is behind them.

The only small, but salient point that I wanted to make in this post is to brace yourselves for *prime* defaults. It's very easy for investors, policy makers, and sundry other Morons to paint subprime problems as an isolated mess.

The entire financial world is intertwined and co-dependent in an almost infinite number of ways.

Again, "subprime" by the very nature of its moniker sounds shady. Subprime loans sound like they not only should never have been made in the first place - they sound like loans whose imminent default was totally expected. But they clearly weren't priced that way. If subprime mortages were priced with a realistic expectation of default, they'd be starting at least a rate of 10% - we aren't even there yet!

Now who, besides me, expects prime mortgage borrowers to default?

Banks certainly don't as these days they aren't marking down anything other than subprime debt.

Those juicy markdowns are coming in the next year or two.
Posted by CaptiousNut at 10:16 AM

Yeah, it's funny that despite all the talk of the "contagion" people still think you can somehow "sterilize" and "quarantine" it and "keep it from spreading" even though that's not exactly how it works... the subprime shat is coming from the same companies that do prime and if they become instable because of subprime they're going to have a tough time meeting their obligations on prime to because of the credit downgrade ramifications of the subprime debacle.

The subprime contagion has already raised mortgage rates on creditworthy borrowers - which in turn lowers asset prices and fuels the foreclosure spiral some more.

A young buck like Taylor should be able to buy a great house at distressed prices in two years time - that is, so long as the housing market doesn't foment another Depression.

In that case, he might be buying three great houses...