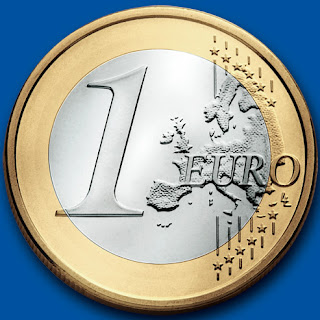 Between Wednesday and Thursday this week I shorted the Euro (versus the Dollar).

Well, I have been itching to short it and a recent spike offered me an attractive entry point. I did short it around 1.44 a few weeks ago but liquidated it with negligible damage. So now I am back in at an average price of precisely 1.47.

Outside of a generalized desire to short it, I am also shorting it as a hedge against some of my precious metals exposure. My two mining stocks, CDE and NEM ran up a bunch in the past week or so and I deem them fit for a breather. Since I don't want to sell any delta (shares) in them directly or short gold or silver against them - I have decided to put a small hedge on via a stronger dollar bet.

Now you jokers may want to trade the Euro to slake your gambling problems. One E-mini contract covers 62,500 Euros. So a one contract position would be like buying or shorting 62,500 shares of a $1.47 stock. It sounds like a lot of moolah but that $90,000 or so investment doesn't fluctuate that much - at least not nearly as much most $1 securities.

I haven't really ever shorted the Euro since currencies have never been my cup of tea, but I never really believed in it going back to its inception. I feel that its rise was just because it represented a safe haven from the dollar more than because a united European Union would present anything in the way of an economic powerhouse. What sucks today is that there really aren't that many currencies robust enough for investors to diversify their risks. There's the yen, the dollar, the euro, and the pound and that's about it. I always figured that the evaporation, er consolidation, of European currencies would raise the value of gold - a point I have not really heard anyone else utter. Look how the long term charts compare: 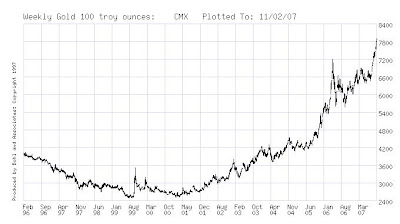 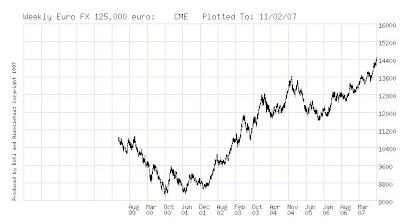 I have to get on a plane to Michigan right now. I'll elaborate later tonight.
Posted by CaptiousNut at 8:50 AM

For the long term, I'm considering buying some of the currency ETFs like FXC and FXE. Would that be a mistake, meaning is the US dollar at a long term low or do we have a lot further down to go?

As I age, and add up all my trading losses, I am coming to the conclusion that long term predictions, e.g. "the dollar is toast", have only gotten me into trouble.

I have no idea where the dollar is heading. In the short run I think it's tired of falling. Something like 90% of traders are bearish on it. Shorting it is a crowded trade.

I also think that if one imbibes the theory that foreigners are dumping the buck because of its economic fundamentals, then it also follows that they will be dumping the piles of Treasury bonds they hold. That hasn't happened yet. When it does, our rates will rise and that should mitigage, if not reverse, the decline of the buck.

I see it like I see housing. Given low mortgage rates, housing can only fall much further. Housing will be a buy when ARMs start at 14%.

In other words, if interest rates were higher today, I could see a further decline of the buck but that isn't the case.

The dollar may continue to lose ground versus gold and oil, but I am less convinced that the euro or Canadian dollar deserve more appreciation.