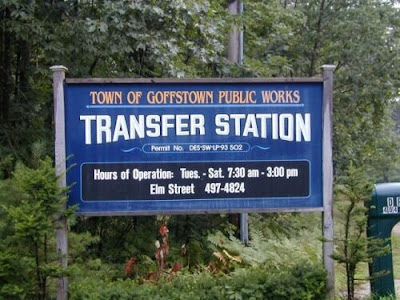 The nearby town of Hingham, Massachusetts has signs up for its "transfer station". Having mostly lived in curbside-pickup cities my whole life, I didn't realize that a transfer station actually referred to the DUMP.

I must have driven by the sign for it two dozen times before I realized what the heck a transfer station was. I feel like making my own "DUMP" sign and plastering it over the misnomer. Allow me to scaffold from this little incident to the philosophical. Read what Will Durant said about Confucious:

So, getting back to the DUMP. I thought to myself, what is it? Do the lunatics in Hingham (and Seattle, Goffstown, etc.) think their trash doesn't stink? Why are they vainly trying to protect the image of nearby real estate? I could smell it in the summer.

Of course I had to google "transfer station". Apparently the label is arguably apropos because the trash isn't buried there. It's just disaggregated and shipped off elsewhere.

Guess what, I DON'T CARE. Every person in the town calls it a "DUMP". And whether they transfer my rubbish or not, I, along with everyone else, still DUMP our sh*t there. 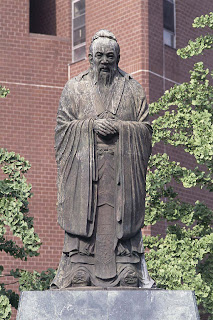 Confucious would probably go insane he he had to live in present day America with all of our misnomers.

Here's a lengthy, but worthy, essay on today's chief obfuscators - Nostalgia Of The Wordsmith Intellectuals. Don't quit on it; it's starts out slow but gets better.
Posted by CaptiousNut at 10:44 AM

Calling a dump a transfer station takes care of NIMBY in one fell swoop.

You know who tackles this problem philosophically quite lucidly? Ayn Rand, in "Atlas Shrugged." Another good tackler of this problem is Mr. Orwell in 1984. The point of both of these writers is that it is often politicians and bureaucrats who prove most crafty with these "misnomers" as you politely refer to them, and that they are so crafty because they have to. If they spoke honestly, with honest language, about what they do and who they point guns at, people would be outraged and call for their heads.