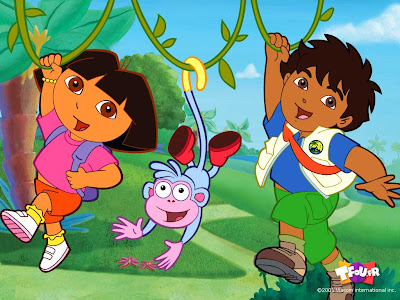 Oh, how to describe the television show Dora the Explorer...

Let's just say, that for the past three years, all my friends and family that read the New York Times newspapers have excitedly asked me, "Do your kids watch Dora? I heard it is really good".

Up until three weeks ago, the answer was a "no". I didn't censor Dora out, my son had just never seen the show, nor had I run across it. The show airs on Nick Jr and I guess we never got around to that channel. Who knew there were about six cartoon channels now?

Admittedly, since my son got turned on to Dora, I haven't watched a lick of the show. I don't watch any of these cartoons because I swear they hemorrhage adult brains cells at a high rate.

Alright, now I am getting long-winded. I set out in this post to say one little thing. If you want, go google Dora and you'll see what all the fuss is about. The show has been construed as political correctness run amok. Many people think it pure propaganda to "Mexicanize" America. The commercial success of this show has spawned a spin-off based around her cousin Diego (Go, Diego, Go!). Though he's not technically a little handyman, he tends to hang out at Home Depot looking for odd jobs, only takes cash, is obviously of dubious immigration status, and allegedly undercuts Bob the Builder on price.

What I wanted to mock today was this disclaimer that I noticed on Diego's program. 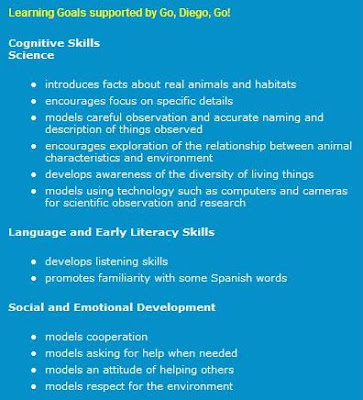 How about I fart on someone and demand thanks for sharpening their olfactory awareness?

There's a whole lot of brainwashing going on in these programs but it's not just the kids who are targeted; far too many parents believe the propaganda behind the shows - namely that the shows are educational. Kids are learning all the time. If they spent those hours outside playing they'd learn at least as much as from vegetating in front of the TV. Parents are either gullible or in complete denial. Nobody wants to think they are a horrible parent for plopping the kiddies in front of the TV for hours on end. Even if Dora doesn't really teach anything, if nothing else, it mitigates the guilt of parental neglect.

By the way, when I try to turn the television off my son goes ballistic. He gets wrapped up in his shows and addicted like everyone else. By all evidence, his listening skills DO NOT IMPROVE from watching Dora, Diego, or anything else.

That's why I try to keep the television watching to a bare minimum. It's for 6:30 in the morning or when there's absolutely no one available to play with.

I don't worry about my son being brainwashed by the show; he'll be sick of it in a week or two.

Tell the Morons you are teaching your kids about real explorers like Lewis and Clark and Vasco da Gama.
Posted by CaptiousNut at 12:42 PM