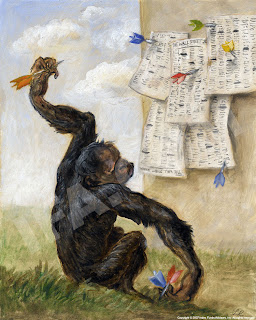 Google is bouncing violently this morning up 75 points to around $525 on an earnings report that has quelled investor fears of a growth slowdown.

Nonetheless, the trajectory of Google's climb since September'05 - the date of my $3,000 prediction - has not been nearly steep enough for me to maintain such an optimistic price target. Heck, from my posting ($300) to the recent low ($414), the stock was up a paltry 35% despite two years of a mostly decent economy.

In fact, I think the sluggish price action of Google during the semi-bubbly years of 2006 and 2007 portends tepid returns for the foreseeable future. Over that period, there were plenty of other stocks running *like it was 1999* - FSLR, CME, AAPL, and even AMZN to name a few.

So what could put some pep in Google's shares?

Well, I am not sure. A stock split would help I suppose. But then again, I think the larger issue is valuation. Google is a $140-$150 billion company and using roughly a $500 share price and $20 in EPS, implies that shares trade at 25 times earnings. Quite frankly, market participants aren't comfortable valuing such large companies at high PE ratios. It's sort of uncharted territory. Furthermore, what history the market has in slapping high multiples on large names, e.g. CSCO and MSFT back in 2000 before they cratered, doesn't exactly encourage a 30 or 50 PE ratio for Google today.

I do believe that what's retarding Google's stock price is the

2) the largess it showers on employees.

Read this excerpt from one of today's news stories on the recent earnings announcement:

If not for expenses to cover stock given its employees, Google said it would have made $4.84 per share.

That last line is if not bearish, it's definitely NOT BULLISH.

Now you are talking about $3 per share on an annualized basis. AND, that's in a quarter where the stock dropped from $750 to $400. (What these companies do is buy the stock in the open market and then give it to their employees - I think.)

So looking forward, say shares were trading at $1,000 a piece, well then, would it not follow that Google's stock compensation item would at least double - to $6 per year in EPS? Meaning, if management has to go out an pay market prices, this "expense" will keep rising with and continue to choke off the accounting of earnings.

Devil's Advocate - Yo, as share prices go up, Google will do what all companies do and hand-out fewer shares to achieve the bonus targets.

Well DA, that may very well be the case, BUT, have you seen any sign that Google is throttling back? By the time it's trading 1,000, who knows how many more high-priced employees they'll have added.

I certainly haven't with their cafeteria and other perk anecdotage.

The fact is, as I heard someone else assert a while back, Google management might have the highest "Ego-to-Price" ratio in stock market history. They think because they launched a timely business model (web search advertising) that they can scaffold up to eradicating the combustion engine, among other utopia building fancies.

They think they can be cutting edge and growth-hungry while lavishly compensating their employees.

You know, many decades ago, when Walt Disney was the Google of its time, it paid its employees peanuts. The best and brightest went to work for Walt solely for the rush of "changing the world" (of entertainment anyway). This describes the tech bubble boom of the 1990s as well.

In Google's defense, it's not all their fault. In my utopia, companies would be able to grant stock options WITHOUT expensing them - as they legally could do before the dot.com bubble blew and the econo-illiterates in Congress got to work. Over the last few years, companies shifted what used to be long-dated, high striked option compenstion to the more short-sighted restricted stock grants. 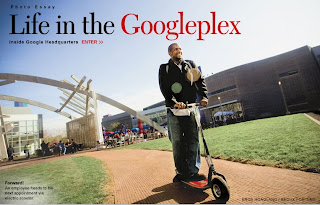 Today I have to figure out what to do with the extra Google I bought at $508 a month or so ago. Should I dump it or close my eyes? Given that the bond.com bubble's implosion is well underway, it's very hard for me to optimistic about owning ANY financial asset in the near term.

And those of you who are long Google ought to be thanking ME for today's bounce - because in March, I bought a ton more at $428, held it nervously for three weeks, and dumped it at $432.

And just like all these hack analysts on Wall Street, deep-down I know that's probably waaaay too optimistic.

Why is it relevant to an investor whether stock options are expensed? The stock options dont have a negative effect on cash flow when based on dilution of the overall stock, right? Relevant expenses are those that affect the cash balance of a company. If the annual reports were made in a rational manner, one would be able to start with the net worth of a company in year X, add together all profits - losses between year X and Y, add this to net worth in year X, and this would equal net worth in year Y. That is not possible when stock options are expensed. My main objection to expensing stock options is that it makes a mockery of the annual report. To the rational investor, who reads the SEC filings, stock options represent a potential dilution, that will be realized depending on whether the actual stock price exceeds the strike price of the options. Expensing of stock options is legislation inspired by dotcom boom envy, but as a whole, quite irrelevant.