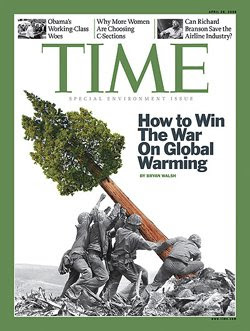 Hah! That cover was provocative to say the least. As I have said before on this blog - every American kid should be forced encouraged to read Flags of Our Fathers.

Can y'all believe that only one pagan wished me a "Happy Earth Day" this week?

I guess fraternity isn't a such a big part of this born-again religion.

I spent all day (a full 24 hours) idling my Chevy Suburban and running the faucets (apologies to the water-providing landlord) and NOBODY CARED.

I had to laugh at my mother yesterday. She is starting a "compost pile" - can you say sheeple? I asked her if she was doing it "properly". Yes, she insisted. I probed further, "Is it elevated from the ground?" - to which she answered in the negative.

[Imagine my most derisive laugh here]

One of my old babysitters (I certainly don't research heathen rites) informed me that the compost pile has to be secured against animals, specifically raccoons in these parts. I also heard just now on the radio about some Moron in Marshfield, MA whose dog snacked from the compost and almost died. This is what is known in scientific circles as Moron Justice!

It's now April school vacation and since my mother, the government school teacher, had the week off, I shipped my kids out to her for the week. ERGO, I am basking in kid-free bliss. I played golf yesterday and will do so again on Friday. As proof that there is a God, he's bestowed 80+ degree sunshine on me today and I am cavorting outside topless!

So besides some golf, I spent the morning at the DMV getting my NY license exchanged for a Massachusetts one; heck, I've only been here now 2.75 years. It only took 90 minutes and, as y'all know, it's great people watching at the DMV. West Coast Tom got me scared last week. It seems that he got pulled over (solicitation?) in California and the fact that he never swapped his Mass license for a California one got his car impounded. Pretty harsh, no?

Otherwise, for the rest of this glorious kid-less week I plan on cleaning my entire house - scrubbing tiles, cleaning underneath ALL the furniture, doing the windows, cleaning the stove, vaccuuming the cars, and a million other things. AND, I am very much looking forward to it all.

Never in my previous life could I have predicted that a vacation would ever include Windex and the DMV!
Posted by CaptiousNut at 1:22 PM

Jesus, so the "War" on GW has been officially declared now?

When will these "War"-mongers get sick and die already? War on Poverty. War on Drugs. War on Terror. War on GW. All failures. All wastes of money.

Makes me sick enough to keel over and die myself.

Btw, do men go "topless" outside? That's a disturbing image, to say the very least.

My Earth Day was mostly unimpressive, minus the dillweed in accounting who interrupted class to gleefully exclaim "It's Earth Day today!" (arms up in celebration, looking around at his classmates who are unresponsive)

My roommate said that some girls came into one of his class and asked the professor, "Ummm, like, sorry, I don't know if you know this, but, like... it's Earth Day, so could you like, turn off some of your lights or something out of respect?"

Dark Ages round 2, here we come!

I may as well add that the car got impounded FROM MY DRIVEWAY!! My actual parking spot! Brutal.

This is precisely what Will Durant refers to as:

I'll bet that professor lacked the stones to turn every electrical device on in the room right in the faces of those flippant chicks.

Note that TJ (aka West Coast Tom) DIDN'T deny anything about the "solicitation"!