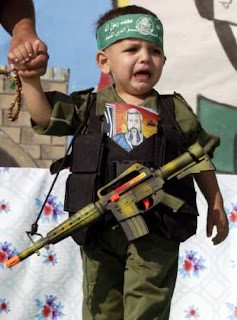 My son (NOT to be confused with the homeschooled Palestinian above) turned three this past November and it became time for homeschooling to graduate from an idea to a practice in our household.

Our little Johnny is now on a fast-paced curriculum of my design.

He can't hold a pen and write yet - but then again my penmanship is now but a notch above illegible doctor scrawl. He's learning his letters and numbers on the computer.

I pull up MSWord, increase the font size as high as it goes and he types away: his full name, the alphabet, words, and numbers. He even knows how to change the font color; and knows full well not to ever type in green!

It took some time for him to learn the keyboard but now he's got it down pat. Navigating with the mouse has been a breeze for a while now too. Since John loves to watch Transformers clips on YouTube, he had to learn how to click on the search box, type "transformers", and either hit ENTER or click on Search. Believe me, this lesson plan needed ZERO prodding! He's also known for a while how to click on an interestingly looking icon and play a different clip when the current video bores him. Invariably, his wanderlust would take him away from the Transformers videos and onto some other less interesting subject. At first he'd go ballistic and track me down in the house, "Dad, Dad, my Transformers are gone! They're gone!" So I showed him how to use the back arrow. He's learned to keep hitting it until he's back on a Transformer riddled page. Not bad for a kid still less than 3.5 years old, huh? 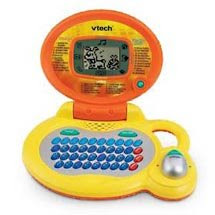 The other day my wife dug out this little Vtech computer that John's grandmother bought him a while back. John hadn't touched it for a while since it was stuffed in an unopened moving box; he was also a little too young for it last year. Anyway, my son was playing with it yesterday and struggling to find the letters it was telling him to type. My father (grandfather) was artlessly yelling at him, "No John, the H is next to the I". I looked up and realized that John was having difficulty because he was used to the real ASDF JKL; keyboard where the "H" and "I" do not abut. Of course my father thought that by asserting his 3.5 year old grandson was more adept on a conventional keyboard...that I was chock full of you know what.

I laughed and said, "Hey Dad, just because YOU can't find the letters on a keyboard doesn't mean John can't."

Thus far, John is much better with letters and words than he is with numbers. While Optimus Prime is a robust concrete image, the number 13 remains a difficult abstraction. Right now, all John can process about 13 is it's placement between 12 and 14. But before you know it, he'll get the handle and have moved on to twin primes and trigonometric identities.

So it suffices to say that our curriculum is currently much more focused on words: recognizing them, sounding them out, and spelling them on the computer. You've got it keep it fresh and continue to move onward and upward. Since he's moved past all the names of his family members I had him start typing the names of his friends.

So let me ask y'all a question? Is it an abuse of my homeschooling powers to continue to send my son up to his unlettered playmates and have him spell their names for them?

Is it wrong to do this particularly when their parents are within earshot?

Remember, I am new at this homeschooling thing and really don't know where the boundaries are.
Posted by CaptiousNut at 9:06 PM

This is great. Homeschooling is awesome. I can't wait to have kids, just so I can homeschool them and indoctrinate them with my viewpoint (as opposed to someone else's, like the State's). Hahahaha, kidding.

Seriously though, that was a creative idea you had there. Great use of technology, which not only makes it fun for little John to learn but also is making him more comfortable with technology at a young age.

Hopefully John learns a lot from you, minus your tendency towards braggadociocity, of course!


By the way, you might like to browse this woman's blog a bit for ideas and homeschooling methods: http://homeschoolinginnewyorkcity.blogspot.com/

I am interviewing the site's author, Angela, and her family, for a story I am writing on them in one of my journalism classes. A lot of her posts are personal interest-related to what her family is up to but she also often posts about how homeschooling works (and doesn't) and what methods and strategies she tries. I know you're a genius and all, but you might learn something helpful from her that may benefit your children's education, seeing as how she's a bit further along on the homeschool discovery process than you are.

I wish you success with all of this though, either way. Cool stuff!