Josh Weintraub - Round Two With The Meathead 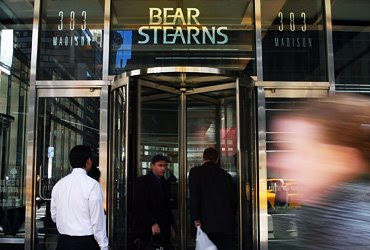 My post Bear Stearns - Run By Meatheads has drawn quite a few hits - as I predicted it would. From my tracking software, it was clear that the magnetic target was "josh weintraub", the meathead.

I got hits from numerous people in the NY area specifically googling him. No doubt - it was his friends, family, enemies, co-workers, and definitely the meathead himself.

Today I find out he's been hired to sit on the board of ResCap - which is GMAC's teetering mortgage company. (link)

I predicted the following about GMAC back in January (link):

Countrywide is on the cusp of bankruptcy. Greenpoint shut down in August. And WaMu is obviously tracking in the same direction.

GMAC will be the next to go belly up - I've heard as soon as this upcoming May. 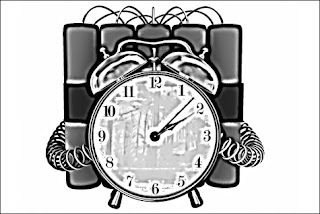 Well, yesterday ResCap/GMAC had its ratings slashed by Moody's:

The agency said it had cut ResCap to "Caa1," its seventh-highest junk grade, and in turn that it had also cut the rating of corporate parent GMAC to "B2," its fifth-highest junk rating.

GMAC was spiraling down the toilet anyway; BUT Moody's probably saw the hiring of two Bear Stearns guys (Weintraub and "mortgage whiz" Tom Marano) as the catalyst for this additional downgrade. After all, the ratings agencies job is ostensibly predicting these failures IN ADVANCE.

Now back to my job. The purpose of this post is - predicting history in the making.

ResCap/GMAC might make it past May, but it has little chance of survival into 2009. THEREFORE, Josh Weintraub will most likely have presided over TWO massive, ginormous bankruptcies in a single year!!!

Somebody call the Guinness Book of Morons.

By the way, I also found this video of Josh boxing in November. They were happier days to say the least. Note the profane, Neanderthal toadies cheering Josh on. See what I mean about Bear Stearns, having been run by "meatheads"? They don't hire intelligent people on Wall Street - they hire nephews and fraternity brothers. Anyone who's ever worked in Lower Manhattan is well aware of this long-standing policy.

Wall Street is a disgrace C, for many reasons. Here's one that got me: all these people working on Wall Street also LIVE THERE! These people, even on their junior IB salaries, are spending like 20%+ of their income on housing every year. They obviously can't keep their own finances straight and spend modestly, and yet people trust them to keep THEIR finances straight and invest their hard-earned money modestly?

When everyone on Wall Street starts living in New Jersey, Queens, Brooklyn (and better yet, the Bronx) and not living it up in the city like a bunch of frat boys who were never told college ended ten years ago, that's when Wall Street will have some respectability again.

In the meantime, I guess we can enjoy Wall Street meatheads boxing each other "for charity," a truly lower-class/no class choice of sport.

CapNuts, you are transparent. You are so embittered by the fact that you weren’t cut out for a position on the mortgage-backed securities desk at Bear (what, like 6 years ago?), that you’ve held a grudge this long? You claim that one person is responsible for the fall of this company. How narrow-minded is this? Didn’t you interview for a position on this desk, with this company? If you had gotten the position, wouldn’t you have aimed for the same stature within this company as the person whose name you now try to denigrate? I think you’re bitter to see someone else’s success in an arena in which you weren’t able to compete. Maybe you didn’t meet the objective and subjective requirements for the position. Maybe Josh just didn’t like you (I can see why). I know Josh. If anything, he’s fair. If anything, he’s intelligent. If he wants to win, he surrounds himself with superior people, and utilizes his assets. You were not one of them, at the time. Get over it.
To bash Josh personally, from behind a wall of obscurity, and in front of the whole world, no less, just because you felt slighted, is cowardly and narrow-minded. Did Josh ask other interviewees the same questions he asked you? If they demonstrated the skills management found necessary to succeed, that’s their prerogative. You don’t like it, you should find a company that requires skill sets of your type and level. Sounds to me like he was helping you to avoid frustration, as well as a waste of time, energy, and resources. You should have thanked him.

By the way, did you know that Josh was an honors student at a world-renowned International business school with a degree in International Business, as well as a collegiate boxing pedigree? Did you know that he’s a well-loved and respected family man, with friends around the world? And did you know that by participating in the Wall Street Boxing event, Josh raised over $50K for a charity that helps children with cancer, and he has raised much more than that through friends, family, business colleagues, and other networks? (The Valerie Fund's mission is to provide support for the comprehensive health care of children with cancer and blood disorders. (http://www.thevaleriefund.org/fund.asp).) You don’t support this? Wow. What have you done to make your world better? You spend your time chopping people down.

You know what? Learn how to calculate 11/25th’s of $11,000,000. The skill may leak into other areas of your brain, and improve your life. Isn’t that a positive way to look at this? You’re a hurtful person, and you’re using opinions rather than facts. Maybe you should learn to be more like Josh.

None of my writing was sanctioned by Josh, nor does he know I wrote this.

I would like to thoroughly respond to your comment as clearly you spent a lot of time on it. Alas, I am very busy - so I apologize.

One quickie for now. You asked:

Didn’t you interview for a position on this desk, with this company? If you had gotten the position, wouldn’t you have aimed for the same stature within this company as the person whose name you now try to denigrate?

The answer is an emphatic NO.

Do you seriously want to weigh a 50k charitable contribution against that monumental, ignominious, widows-and-pension-fund-robbing loss?

By the way, I am astounded at how many hits my "Josh Weintraub" posts have gotten. If he's such a grand, talented fellow then he'll have no problem achieving great things going forward. For sure his future accomplishments will push my blog far down the search results. for "josh weintraub bear stearns".

Don't worry "andy", after Round 3 With The Meathead, i.e. ResCaps inevitable demise, I'll probably be out of material and your son/nephew will fade into the Elysian background of Marginalizing Morons.

To suggest that his initial goal, as he ascended the ranks as those before him, was to drain the lifeblood of Bear and its people makes no sense. To reach this vampiric end, he would have had to attain the senior-most position, which he did. He would then have had to engage his evil plan, to kick the legs out from under his own house, bringing himself crashing to the ground along with everyone else. He who sits highest, falls furthest. Why would he have set out do this to himself, let alone all of the innocents you’ve included in your giant yarn of cynicism? I'm sure this has been his goal all along. Think about how idiotic that would be.
By the way, there's nothing Elysian about your blog. It’s your diary.
And you’re basically saying that Josh used Bear and it’s stockholders for his own gain, and you curse the notion. Don’t forget, his name draws for you because he's accomplished a great deal, and you suckle on that teat like a baby lamb.
Why did you put "andy" in quotes? It's my real name. Grammatically, that just didn't make sense.