Massachusetts And Healthcare - Another Profile in Fascism And Stupidity 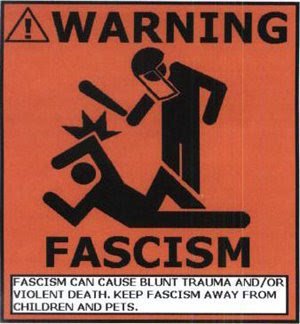 As of 2007, Massachusetts residents are now compelled by law to have health insurance. If one chooses not to be insured, the state will fine them I believe around $300. Likewise, if a business employs 11 employees or more it must offer a health plan or suffer a fine as well.

Sure if you want to drive a car, you ought to have insurance in case you injure another party, but what could possibly be the motivation for forced health insurance?

If I get sick, how exactly does that affect anyone else? Contagious diseases are few and far between these days.

Devil's Advocate - Well, if one doesn't have health insurance, when they do get sick and show up at the hospital, then the government will have to foot the bill. So in that sense, the uninsured cost taxpayers money.

Well, obviously we need to get rid of mandated care then. DA you should go back and read my free hot dog analogy. Since it's short I will reprint it below:

If some restaurant decided to give away free hot dogs, there'd be a long line around the corner to get them. Then invariably, some politician will point and clamor, "Look how many people NEED hot dogs!"

I say you allow hospitals to turn away anyone who can't pay. Let gunshot victims from the hood bleed out on the sidewalk if they're uninsured. No doubt one of his buddies has some bling currency to pay for urgent care.

The idea that the government is capable of administering a universal, for-the-wretched-and-poor, healthcare system remains a fancy. It's their very mandates, tax-breaks, and existing subsidies that have pushed healthcare costs to such stratospheric levels . So now, after they have made it prohibitively expensive, they are going to wax indignant and compel everyone to buy it one way or another!?!?!? 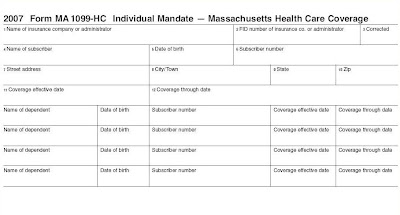 Massachusetts employers (there are 12 left!) actually have to issue a new tax form to their workers - a 1099-HC. The Commonwealth has decided to use tax returns to enforce the healthcare mandate. My wife accidently threw it out with the junk mail and we had to scramble to find another copy. From reading some websites, she was by no means the only one to make this oversight.

While filing, I noticed a religious exemption to the healthcare mandate. Residents can check a box if their faith rejects modern medical treatment; I assume it's for the Scientologists(?).

Then right below, the tax form asks if you are claiming a religious exemption BUT have sought medical treatment in the past year. Don't try to lie! In other words, they are going to investigate any religious hypocrisy - which apparently the State of Massachusetts also feels is well within its charter.

Well, if that is the case, why pick on one religion?

I say, if some emptyhead buys a Prius but has oil heat and/or more than 3,000 square feet, and/or keeps their thermostat above 73 degrees....

...then the state ought to revoke the $2,000 hybrid vehicle income tax deduction.

After all, the government isn't supposed to be establishing or favoring any particular religion, correct? I say round up and flay all the hypocrites! 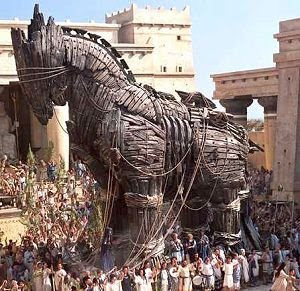 Make no mistake, this healthcare mandate is not the rotten fruit of economic illiteracy - as making MORE PEOPLE buy something that is too costly only aggravates unaffordability.

It's not about nanny-statism or a treatment crisis - as 90% of Mass residents already have some form of health coverage.

This mandate is but another Trojan horse, another salient by statists against the rights of private individuals. If you pay attention, the subterfuge is apparent in the words of program officials:

"We need to be fair and lenient in terms of enforcement both on employers and individuals in the first year in order to not incur some kind of a backlash," said Richard C. Lord, president of Associated Industries of Massachusetts and a member of the Connector board. "We need to.....give everybody a chance to adjust to the new realities."

They've already admitted the fine for uninsurance will rise every year. Was there ever a doubt? Next up will be more regulation ("standard setting") on the minimal care and insurance levels. In the meantime, jobs and people will continue to flee the state - an old reality that jurassic politicians have yet to adjust to.

My neighbors here in Massachusetts are old and Moronic; unfortunately I also get the government they deserve.
Posted by CaptiousNut at 4:32 PM

I saw an ad for "NYC Condom" today on the subway and after gagging at the depiction of two "alternative lifestyle" people showing their love for one another in the ad, I began pondering how any politico justified a free condom program.

Well obviously it was some attempt saving money in the public health system... give people free condoms, there will be less STDs, abortions and unwanted pregnancies for the system to handle.


Cost-cutting attempts related to public health are implicit admissions of the impossibility of the idea of providing everyone with free healthcare. If it was an affordable program that made sense econo-logistically... there wouldn't be a need to cut costs (ie, limit peoples access).