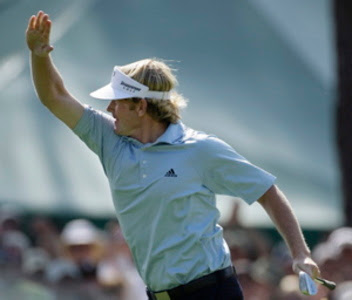 It was a tough weekend, this past one, for old men at golf courses all across the fruited plain. Brandt Snedeker, pictured above, was in contention all week at the Masters. I almost pissed myself laughing at two old guys in the clubhouse trying to say his consonant-riddled name. Because, if you weren't aware, that's what old men do. They get up at 4am, watch the weather channel for 30 minutes, drink coffee, peruse the newspaper, poop, make their way to the golf course, and get all fired up about the prior night's sporting events. Even though I too am an early-morning person, it really is a sight to behold - these 'old coots' yammering about current news-cycle trivialities while the rest of the country is still fast asleep. It's even funnier when the nonsense is spiced up with gross mispronunciations.

My father may be one of the worst pronouncers on the planet. For a decade I had to listen to him calling José Canseco - "Ho-say Can-es-ko". It's okay to get it wrong when the guy is a rookie but my father proved incorrigible, for years. At least for this one he didn't pronounce the "J" in "José". If you ever hear him pronounce jalapeño with the hard "j", you might very well fall on the floor.

My MIL (mother-in-law), despite her scholarly erudition, also struggles with pronunciation a bit. Her notable nemesis is the word "vegan"; she cannot help saying "vee-jan" or another mutilation like "vej-an". Now in her defense, she does have an inborn psychological issue with the concept of vegetables. In fact, her weekly vegetable count will rival, if not underperform, that of the American family in my prior post.

And I've already mentioned my uncle who refers to this musical star: I guess it's part of being old in that they no longer care what they look like, what others think of them, and apparently what they sound like. But there's also got to be a kernel of explanation in their flattened, if not inverted learning curves.

My father really is a self-contained comedy act in this field. I've compiled a lengthy list of his botched pronunciations that would make just about anyone writhe with laughter. For a while my wife thought I was being too harsh on this challenge of his.

Then one day we went to a restaurant on the Outer Banks where he opted for the "saw-teeeeed" vegetables. My otherwise charitable wife keeled over and lost it.
Posted by CaptiousNut at 8:09 AM

It's funny that you mentioned Beyoncé among your fathers interesting pronunciations. I was thinking about why I consider your fathers pronunciation most proper this morning, and my reason is the words 'beyond' and 'ounce'. Of cource, I must defer to Beyoncé's way, giver her beauty!

Beyoncé was my uncle's mutilation. He'd seen her name in newsprint but never heard it correctly pronounced - in his circles.

That's a great link you posted.

I'll hyperlink it for my readers that may have trouble with correct pronunciation and copying-and-pasting.