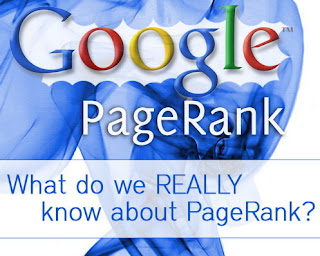 PageRank is a number that Google assigns to web content to label/measure its *importance*. It's on an integer scale (why not a decimal?) from 0 - 10, with 10 being most important.

For example, Mike Shedlock, aka Mish, his highly popular blog has a PageRank of "7" at the moment.

And over here at Marginalizing Morons, we have a PageRank of "4".

Here are some other's for sites my readers may be familiar with:

How do I find all those PageRanks?  Well, I used this website - one of many out there.

Essentially, I think, PageRank measures the authority of a website. And the higher the authority, the higher up in the search rankings one's content will appear. Since more web traffic comes from search than anywhere else, these higher search results should translate into more site visitors.

So anyone looking to raise their web profile (moi!) should be keenly interested in an elevated PageRank.

I really don't see why, given the above rankings and my prolific content, that I shouldn't be able to move up to a PageRank of "5". This is now to be one of my immediate goals.

For a more in-depth discussion of PageRank, read a higher authority like Yaro Starak. (though I'm surprised he's only a "5"!)

How exactly does one elevate their PageRank?

Well, I think it pretty much amounts to getting others - ideally with very high PageRanks - to link to Marginalizing Morons. Google will interpret such links as contagious, authoritative acceptance.

The best case scenario would be for say, Boing Boing - PageRank "8" - to link directly to my blog in one of their posts OR, even better, on their sidebar. But that's not so easy to accomplish.

Instead, and there's some controversy about the effectiveness of this, I could go on Boing Boing, post a comment, and in the body of the comment embed a link to something I have written on my site. This is an obviously self-promotional practice that I've always hated to indulge in. Usually when I do it the link had to be highly relevant to the discussion at hand.

Another way to manufacture links to one's site it to volunteer to write guest posts for other people's blogs - but only, obviously, if they allow you to include a link back to your site in the content. I also think that the key is to write posts for sites ranked higher than your own or this doesn't work.

But that's about all I know about PageRank....I'll talk about it some more, when I learn more.

Here's something interesting on the subject. From Wikipedia:

PageRank is a link analysis algorithm, named after Larry Page,[1] used by the Google Internet search engine that assigns a numerical weighting to each element of a hyperlinked set of documents, such as the World Wide Web, with the purpose of "measuring" its relative importance within the set. The algorithm may be applied to any collection of entities with reciprocal quotations and references. The numerical weight that it assigns to any given element E is also called the PageRank of E and denoted by PR(E).

The name "PageRank" is a trademark of Google, and the PageRank process has been patented (U.S. Patent 6,285,999). However, the patent is assigned to Stanford University and not to Google. Google has exclusive license rights on the patent from Stanford University. The university received 1.8 million shares of Google in exchange for use of the patent; the shares were sold in 2005 for $336 million.

That was a nice windfall for Stanford there, no?

One thing that Teh Google is doing right now to modify PageRank is to add streaming live social media to the metric. They are trying to use their new Firehose traffic tool to get even more data in a better way. Look for PageRank to really change in the near future.

And mark my work, Buzz is going to become infinitely more important in Google's ranking system. Now, if i can just figure out how to use it more effectively.

I publish my PageRank on my blog because I use that data for my own info. I do not publish my site counter because it shows IP addresses for all my hits. This is double plus ungood for my friends that read my blog.

Yeah I wouldn't short Buzz either.

They unsuccessfully tried to manufacture a viral buzz to it by making it *invitation only*.

But now seemingly everyone is on Gmail.

Freelance IP Network Engineer IP networks must function in a stable and reliable manner, and that is where IP network engineers intervene. They can maintain the network, as well as supervise the work, such as updating and modifying the IP network, since it needs to grow and expand over time.

Not so much. It has more to do with moral convictions and conclusions instead of undeniable realities. The explanation individuals aren't homophobic and loathe races is MAINLY by a long shot as a result of ethics and that they feel terrible for them, not becuase of realities. Also, individuals typically, Pakistani Clothes feel their ethical convictions are more grounded than the realities and they can seem inept that way.

Individuals of all IQ's have every extraordinary sort of conclusions. Homophobes may realize their feelings, budget web UAE aren't right yet they probably won't give it a second thought, so they're not so much dumb just douches.

Looking to start an online store? weblancerz offers the Best Ecommerce Web Development Services in DMV to build you an Ecommerce store

Weblancerz is the best SEO Services agency in DMV offering the best SEO services and relevant packages. We help rank the websites on the search engine results using innovative on page and off page techniques

Are you looking for an opportunity to grow your business? Alfa Cybernetics is presenting you best invoicing software for small business at very affordable prices.

This blog website is pretty cool! How was it made!

sale on clothing brands in Pakistan

Pretty nice post. I just stumbled upon your weblog and wanted to say that I have really enjoyed browsing your blog posts. After all I’ll be subscribing to your feed and I hope you write again soon!

This content is written very well.Your use of formatting when making your points makes your observations very clear and easy to understand.Thank you.

You delivered such an impressive piece to read, giving every subject enlightenment for us to gain information. Thanks for sharing such information with us due to which my several concepts have been cleared.

If you set out to make me think today; mission accomplished!I really like your writing style and how you express your ideas.Thank you.

Pretty good post. I have just stumbled upon your blog and enjoyed reading your blog posts very much. I am looking for new posts to get more precious info. Big thanks for the useful info. Wholesale Women Sweatshirts
Wholesale Mens Joggers UK

Everything has its value. Thanks for sharing this informative information with us. GOOD works! Accounting Bookkeeping Service
Tax Agent in Melbourne

Awesome blog!! Thank for providing excellent information. Actually quite helpful data accessible here. If you are looking for assignment help then you can visit our site.... Web Development Agency in New York
PPC Services Agency in New York

Dev Links is offering the Best UI/UX Design Services in Dubai. Our team is fully equipped with the latest tools and technology such as Adobe, Photoshop, Adobe Illustrator, HTML5, CSS#, iOS interface builder, and much more

Do Online Shopping in Pakistan from Pakistani best shopping brands and find your desired products from brands at reasonable price.

Very efficiently written information. It will be beneficial to anybody who utilizes it, including me. Keep up the good work. For sure i will check out more posts. This site seems to get a good amount of visitors.

Everything has its value. Thanks for sharing this informative information with us. aircon price

Zainab online Quran learning institute is one of the Pakistan’s most prestigious academies which offers Quran online reading classes to people all over the world. In the meanwhile, we are here to teach the Quran to you and your child. So that they can easily understand Allah’s message. This is the Best online Quran reading institute in the field of education system comparatively to others. Finally, If you want to success in whole life then it is very important to recite Quran by heart and word by word. Hence, Our teachers are well-trained and experienced in teaching the Quran to you and your child. Thus, Your children will benefit from both male and female teachers.

Good artcile, but it would be better if in future you can share more about this subject. Keep posting. December Umrah Packages

Positive site, where did u come up with the information on this posting?I have read a few of the articles on your website now, and I really like your style. Thanks a million and please keep up the effective work. Hajj Packages

Wow, What a Excellent post. I really found this to much informatics. It is what i was searching for.I would like to suggest you that please keep sharing such type of info.Thanks
Umrah In Ramadan

It is very helpful and informative.