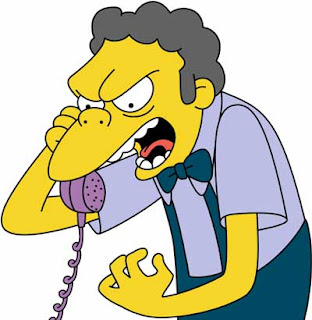 Obviously, whenever you move into someone else's house, there are going to be novel things for you to deal with.

The kitchen won't be arranged the way you're used to; there may be different *thermostat* policies; and so on.

One thing here at my MIL's house that's driving me a little bit bananas is her phones - which are throughout the house, ringing all day long.

It's telemarketers, charitable organizations, political fundraisers, et al. There are distant relatives that call and, of course, all the people that normally keep in touch with or do business with my MIL.

Except that the phone rings, literally, off the hook! There are a stupendous *41 missed calls* on the Caller ID at the moment.  Have you ever seen such a number?  I hadn't.

The other night the phone rang at 10:30 pm when we were sleeping.

There was one phone in my room, next to my bed that just had to go. My personal policy was to NOT AT ALL answer the phone. And why would I? It'd would never be for me. I'm not an answering service or a secretary - especially not when it rings that often. I really wanted to remove this phone - THAT RANG ALL THE TIME - from my nightstand but hesitated at first. After all, this wasn't my house and often times my MIL would be outside, hear her phone ring and run in and grab the closest phone which happened to be the one next to my pillow!

But I had to get finally get rid of it. A week ago, the phone rang and woke me up at 5:12 am. It may have been a wrong number, but still. Enough was enough.

That's the beauty of cell phones. Remember before them when you had to answer OTHER PEOPLE'S personal calls? Remember the small talk you had to endure with your buddy's parents or sister before getting a hold of them?

My own parents' phone seems to ring quite a bit as well.  Generally, the longer you've been somewhere, I think the more your number will be dialed.

But with my MIL, not only has she had the same number for decades, she also donates money to numerous organizations.  And once you're on their lists as *generous*, they're going to solicit you out the wazoo!

Of course just about everything, including the solicitation, can be done over email these days.  My own cell minutes are now down to around only 150 minutes per month - as all the small talk has permanently migrated over to email and text messaging.

I've just about gotten to the point where I loathe everything about phones...

Was it not possible to turn off the ringer on that particular telephone?

It was NOT a rotary phone!