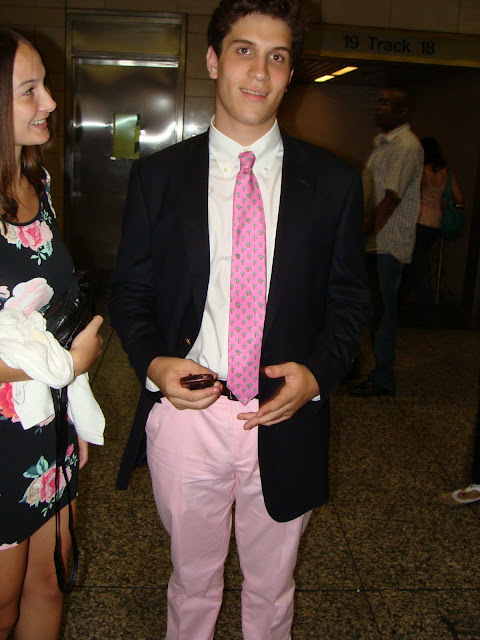 Okay, last night I saw this tool at Penn Station just after midnight.

Now, being the proprietor of a blog called Marginalizing Morons AND having a camera on my person, it was incumbent upon me to snap this pic.  Right?

I mean, who the bleep would ever buy a pair of pants like that - no less don them in Manhattan on a Friday night?

As you can see, he sort of smiled as I sized up the shot. But then he must have gotten pissed.

Our train (home) was announced and I hustled down to board with my wife, a friend of hers, and her husband.

Ten minutes later, while we're sitting in our seats, this clown walks up out of nowhere and sort of gets in our collective faces, demanding that I erase the picture of him on my camera.

We all got a hearty laugh out of that?

But was he serious?

We told him to get (fill in the blank) lost.

He said I needed to take my camera out and erase the picture I took of him.

At this point, everyone else on the train has turned off their iPods to focus on the spectacle at hand....and is also giggling.

Pink Pants - Stand up and take your camera out. Show me the picture. You can hold the camera, but you need to delete it.

Say what? Did this Moron have a death wish or something?

CaptiousNut - I can hold my own camera?  Gee, thanks.

CaptiousNut - AND If I stand up it won't be to take out my camera.

Was this guy some secret ninja or something? Why would he try to provoke us like that? The other guy in our group was only inches away and, he's even more physically imposing than I am!

But seriously, who in their right goes up all alone and antagonizes bigger dudes, in front of their ladies, late on a Friday, when everyone's got a little booze in their system?

He could have been, but I don't think he was a martial arts warrior - I think he was just irretrievably stupid.

Our wives are cracking themselves up, and messing with him themselves.  And at this point, the entire train is abuzz with laughter.

Pink Pants - What are you going to do with that picture?

The conductor comes by for our tickets.  We ask him to tell the Moron to get lost.

The conductor pauses, looks at the guy we pointed out... and bursts out laughing, "YOU MEAN THE GUY IN THE PINK PANTS?!"

By now everyone on the train is rolling and all but peeing in their non-pink pants...

I reach over and grab my wife's friend's camera.  For theatrical effect, I turn my face towards Pink Pants and then conspicuously glance down at the camera.  Laughter roars through the train car yet again as I raise the camera up and take a couple more snapshots - even going *vertical* for the second one!

Another conductor comes by, threatens us all with having the cops settle this altercation.

It was announced that the cops would be there at the next stop, at Shea Stadium.

CaptiousNut - I'm also going to tag this pic on Facebook.  I'm going make sure every *Great Neck* group sees it...

(At some point the weirdo revealed that he lived in the town of Great Neck.)

The cops, six of them(!), do get on at Shea and they were quite belligerent to us.  One cop in particular started screaming at me and threatening to pull me off the train.  I responded indignantly:

CaptiousNut - What?  I can't take pictures of people out in public?

CrazedCop - Not if it makes them uncomfortable.

CaptiousNut - Those pink pants were making me uncomfortable!

The cop was insisting we take out the camera and delete the pictures.

No bleepin' way, I was thinking.  He had no right to do that.  What, is this the Soviet Union or something?

The whole thing was getting surreal.  And I didn't particularly like what happened next.  The women in our group took out the second camera to appease the cop and erased the pictures I had taken in the train.

Ultimately, some guy sitting behind us stood up and volunteered to explain the thing to the cops.  Him they listened to and then they whisked Pink Pants to another car after threatening us, yet again, to let him be - even though he was the freakin' antagonist!  But as he was being sent elsewhere, he was still pleading his case:

Pink Pants - (to the cops)...but one of them asked me where I was from...it was a conspiracy against me...

The train car was a bit of a madhouse at that moment because the Dave Matthews concert (at Shea) had just let out and there were teenagers galore pouring in simultaneous to the police's arrival.

With Pink Pants and the *law* gone, everyone in the train-car starting laughing and rehashing their favorite moments - except for one killjoy.

I hadn't seen him at all until he started cursing at my party.  He was calling us a$$holes and whatnot.  We were all taken aback.

What in the world is going on here?  My wife's friend starts firing back at him, whoever he is.

Apparently he just boarded after the concert and based upon 30 seconds of second-hand observation came down on the side of some random guy wearing pink pants.

For the second time that night that train ride I'm overwrought with disbelief.  This guy child was all of 135 pounds, soaking wet with a stone in his pocket!  He was definitely trying his very best to get his teeth kicked in  He called my wife's friend a "B" and a "C".  Again, her 6-foot+ husband is RIGHT THERE, only 5 feet away from the weakling. Any minute I expected him to explode.  Personally, had my wife been spoken to like that, by a guy of his stature, I'd have reacted in a most un-Christian, physical manner - real fast to boot.  (Of course if he was big,...I would have shushed my wife right fast!)

So the entire train is captivated yet again by another confrontational, jaw-dropping Moron.

I stand up if only to mercifully urge the fool to shut up and think for a second...and this twerp suggests that I *may get smacked*.

"How exactly would that happen?", I inquired.  Did he have a step-stool hidden in his pocket or something?

Thirty seconds later, this angry pissant got up, cursed the whole train, and ran off to another car!

Mrs. C-Nut - What was his problem?  Did the concert stink or something?

Now what are the odds of coming across two outrageously Moronic people in a row like that?

It reminded me of this great Seinfeld Clip - Lord of the Idiots....A new contender has emerged.  Make sure you visit this link.

Maybe 15 minutes later, as the train stopped at Great Neck Station....I had my camera locked and loaded and was hoping to flash Pink Pants as he de-trained.  Alas, the conductor was too slow to move and I missed him.

It shouldn't be too hard to get that pic circulating among his classmates on Facebook...

After I take care of that I'm going to have to deal with my ego; it just doesn't know how to process the fact that Tinkerbell and Tweety Bird just about tried to fight me!
Posted by CaptiousNut at 11:01 PM

You shouldn't be out and about the town past your bedtime, C. Look what happens when you are.

Why antagonize the guy? Just for fun? Says as much about your mindset as it does his. Can't you see that?

I think you should move the 'good book' quotes off of your blog. Hypocrisy, otherwise.

Please tell me you would NOT want your son acting as you did. Perhaps you should rethink HSing?

Standing up for oneself is one thing. Harassing a man in pink pants, for 'fun', quite another.

If the guy didnt mind "wearing" them, why should he mind being photographed in them? He's been flashing himself around like a clown, he deserves it.

I was a victim here. All I did was push back. Most of the childish teasing came from the *women*.

But say for the sake of argument I was indeed messing with the guy a bit.

You think THAT would disqualify me from homeschooling my kids?

Yeah, send them to government school....they won't learn anything about *teasing* there!

I lost a small bet with my wife.

I thought for sure you would make some comment about the belligerent cop trying to make me delete pictures on a camera.

Goes without saying at this point. Pigs are pricks and you know that's how I feel.

You're seriously lucky you didn't get TASERed, these pigs just can't wait to arrest you for "resisting arrest" these days.

Regarding the cops: you are living in commieville, and you expect your rights to be respected? Consider this an easy lesson.

Regarding the bible quotes: yes, take them down, but do it because ancient goat herders wrote sucky "wisdom" quotes, not because of some jackass closet case in pink pants.

CNut, I'm glad that you kept the "ancient goat herder" quotes in place. Wanting to bust some jerks face is human. Not doing it is Christian (in many cases).

Wait until you run into some idiot like anon. 10:12pm with your kids. It's 10 times harder to trust God to eventually make all things right and turn the other cheek.

The kid was perhaps mixing up his virtual realities.

This story was epic! Awesome, laughing out loud reading tonight. Thanks a bunch.

this is how high school bullies are. go around doing things they like, not concerned bout how others feel. selfish motive for your blog there. i dont see anything christian. taking someone's photo without their consent is a privacy issue. grow up.

I have rights. I'm certainly allowed to take pictures in public places.

No one has a right to privacy, least of all in public.

Show me where the *right to privacy* is codified in the Founding documents, please.