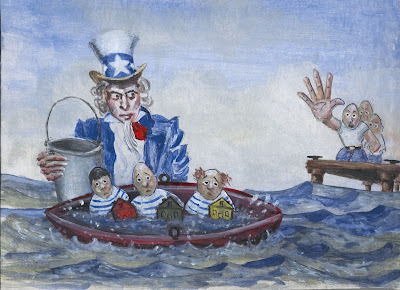 Someone just emailed me this - which I'm sure I've seen before in another form:

It's a slow day in a damp, little Irish town. The rain is beating down and the streets are deserted. Times are tough. Everybody is in debt and living on credit.

On this particular day, a rich German tourist is driving through the town, stops at the local hotel and lays a ¤100 note on the desk telling the hotel owner he wants to inspect the rooms upstairs in order to pick one in which to spend the night. The owner gives him some keys and, as soon as the visitor has walked upstairs, the hotelier grabs the ¤100 note and runs next door to pay his debt to the butcher.

The publican slips the money along to the local prostitute who is drinking at the bar. She too has been facing hard times and has had to offer him services "on credit". The hooker then rushes to the hotel and, with the ¤100 note, pays off her room bill to the hotel owner.

The hotel proprietor then places the ¤100 note back on the counter so the rich traveller will not suspect anything. The traveller comes down the stairs, states that the rooms are not satisfactory, pockets the ¤100 note and leaves town.

No one produced anything. No one earned anything. In the meantime, the whole town is now out of debt and looking to the future with a lot more optimism.

And that, everyone, is how the bailout package works.

I think there's something fundamentally wrong in this analysis - but I lack the time or concern to figure it out.

It's funny anyway.
Posted by CaptiousNut at 10:18 AM

the town folks have pray that nobody is dumb enough to give some parts of that 100 to banks or wall.streeters. They wont ever see that again. Its a sinking deleveraging hole.