Death Of A Vegetarian... 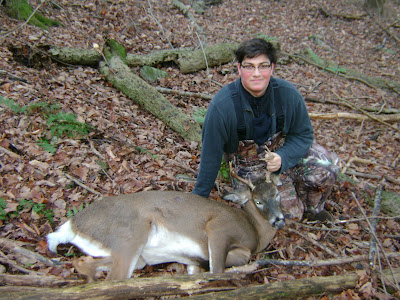 And I'm not talking about the deer either.

That's my nephew above with an animal he recently offed, for sport, with a rifle.

If only I had the video footage from about six months ago...

We were out at the family summer house when the 15 year old chauvinistically declared to me, my first wife (his aunt), and his grandmother that he was now a *vegetarian*.

We couldn't even bring ourselves to react. I mean he's a typical teenager who sleeps until 2pm and doesn't exactly fetch water or in any way contribute to the family. So how exactly was he going to execute his new eating plans? He either has to eat what's put in front of him, what's found in the refrigerator, or starve.

Several hours went by, or perhaps it was the next day still at the summer house....and I don't know what precipitated it, but from afar I heard my nephew exclaim, "FINE, I'LL JUST EAT MEAT!"

We all got a nice chuckle out of this upstart moral crusader's endurance.

And now not only is he out there murdering deer, I believe that hunting weekend he also nibbled on a black bear's heart (that someone else shot).

Not for anything, but there were plenty of fruits, veggies, and non-meat items the kid could have eaten back at the summer house.

Of course, he would have had to get up off his duff and prepare them for himself if he wanted to stick to his diet.
Posted by CaptiousNut at 7:35 AM

Alright, so everyone in your whole family has now made their first kill. When are you taking the Prince and the Princess shooting?

I'll definitely go with him one day - but maybe when my son is 7 or 8.

Chances are your nephew, like the rest of us, will keep setting standards for himself that he'll later slay when he finds they're too hard. Let's hope he just doesn't judge himself too harshly for his slackerhood.

Besides, there's something to be said for the ethics of eating less meat and when choosing meat, eating it from animals that had good lives. Betcha that deer had better times hanging out in the woods than most organically raised cattle do hanging out in barns.

As for that "vegetarian" label, it works to get girls. I know a certain guy around his age who eats no meat except bacon and burgers yet his veggie girlfriend admires his dedication....

I've tried innumerable ways to *pick up girls*...e.g, bathing, ACTING nice, infomercial ab products, buying them rivers of alcohol at the bar....but I never thought, for a second, that becoming a vegan might do the trick!

The tragic thing is, once I did finally figure out how to pick up chicks (proper facial hair length, blowing them off for at least 6 months beforehand, complimenting them on their shoes and purses, etc.)....by the time I had figured it out, one of THEM had already taken me off the market.