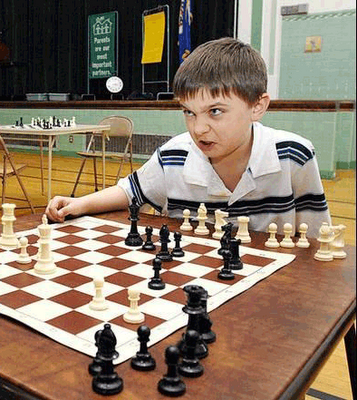 Alright I took my son to the local library's chess club tonight....where I myself was promptly and summarily demolished by an 11 year old kid.

For one thing, I have actually been practicing, hard. I've been playing daily on Windows pre-installed Chess Titans (level 4). And I've been working my way through a 700 page tome - Standard Chess Openings

. So I thought I was making some real progress!

AND, not only did this twit beat me in about 15 minutes....he taunted me throughout! Before we even started he asserted that *it was going to be a short game*.

Apparently he's been playing since he was 6; he has a paid instructor; and he competes in tournaments.

My intermediate goal, for when I play him next week, will be to last 20 minutes. Baby steps...

This is hilarious. I love trashing talking children.

When I was 11 I could beat about anybody in pool and made some money from my older sister's friends. Teenage boys hate losing to an 11 year old even more than young coots in their 30s.