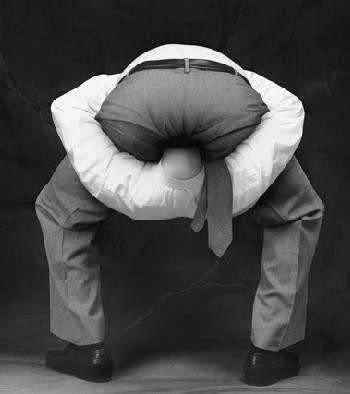 Listen to that Harvard Economics professor - Greg Mankiw - the Moron whom I harrassed into removing ALL COMMENTS from his econo-aliterate blog:

My view is that QE2 is a modestly good idea. I say it is a "good idea" because, like Ben Bernanke, I am more worried at the moment about Japanese-style deflation and stagnation than I am about excessive inflation. By lowering long-term real interest rates below where they otherwise would be, QE2 should help expand aggregate demand. I include the modifier "modestly" because I don't expect these actions to have a very large effect.

It's amazing that a purported *economics* professor thinks printing money a modestly good idea - even if he mumbles his trademark hedging.

But then again macroeconomics is a junk science.

And Greg Mankiw is nothing short of a self-aggrandizing slimeball.

Of course he, and the other plutogogues, are afraid of deflation.

So what if the printing press hits Joe Blow at the pump and in his grocery bills...

And so what if the disgustingly-euphemized QE eventually leads this nation to a hyperinflationary ruin...