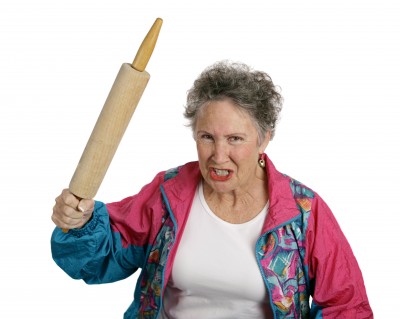 Well it's been a long and interesting 7 months living under the same roof (hers) as my MIL.

But this week she *closed* on her new condo and is slowly, though eagerly, starting the process of moving her stuff out.

Her plan all along was to vacate and leave the house for us but it temporarily changed when we moved in. Back then it seemed like she had changed her mind and was going to cohabitate here with us.

She spent most of this brutally hot summer out in the Hamptons but when she came back I think she reverted to her original plan of moving to this fancy shmancy retirement community.

I could elaborate, colorfully(!), a whole lot more but will just leave it at that - for the moment. Anyone who is thinking about living with their MIL or own mother....shoot me an email on the side and I'll helpfully intervene.

The house is very big here, almost too big for the four of us; it needs a lot of TLC/renovation but should be spectacular before long. I expect the entire next year to be filled with household projects. In fact I may even do a walk-through with my camera and post the floor plan to solicit ideas from y'all.

Living With The MIL Chronicles 1

Living With The MIL Chronicles 2 - Off The Hook Phone Ringing

Living With The MIL Chronicles 3 - Already Over?

Living With The MIL Chronicles 4 - Leading 'Old Coots' To Water

Living With The MIL Chronicles 5 - What is it?

Living With The MIL Chronicles 6 - Kitchen Scrapyard
Posted by CaptiousNut at 8:55 PM

the picture supposed to tell the real story? it worked. :D

Just FYI...I designed the house that we live in now (that we REALLY built ourselves...not like those people who say they are, "building a house," but are actually paying a contractor to do the work).

2. Chicken Coop see no. 5 to protect eggs and chickens.

3. Generator with easy hookups to outside of house see no. 5 to protect generator.

4. An outdoor furnace which allows you to burn anything and everything to heat your water. Screw local regulations.

My brother just slaughter his 900 lb boar and we are swimming in pig sausage if you need any. I will mail it to you with Swine FLU clearly marked on the package to raise your profile in NYC.

Come back for some more ideas once these are accomplished.

Your wife could shoot you with the *9* and then incinerate your corpse in the *outdoor furnace*.

Ever think of that?

Really our problems are *the kitchen*.

It's small, in the middle of the house, and has three doors (one to hallway, one to dining/living room, and one to outside) that frustrate proper design.

I think I will put up photos and a floorplan for y'all. I'm stumped as to what to do. Most idiots say *just push out*. Except that if you do that, here in this area, you get crushed with architectural costs, higher property taxes, and by greedy contractors. Any fool can say take out a 175k HELOC and expand, no?

Actually I have thought of it. I am worth more dead than alive with my life insurance so I am sure it has crossed her mind. Which is why I haven't taught her how to shoot the 9 yet. I was bluffing.
Kfell