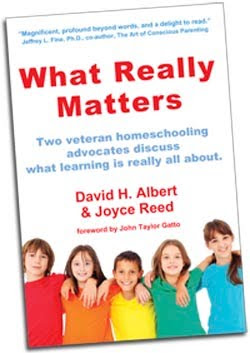 Recall Albert edited some of homeschooling patron saint John Gatto's work. And I've already blogged on a few of his other books - here, here, and here.

Joyce Reed is a new name to me. But hey, I'll eagerly lend my ears to ANYONE who's successfully homeschooled and expelled five kids!

The book is set up, skeletally, as a dialogue between these two *veteran* homeschoolers. Except it was more like a monologue with alternating voices. There wasn't any discernible disagreement in there either; just a whole lot of high fives and wet kisses going back and forth.

Nonetheless, the book was terrific and it instantly rises into my top five list of must-read homeschooling resources. More than a few times, in the course of reading it, I had to remind myself to inhale, and exhale.

Homeschooling is such a vast subject the narrow term itself ought to be done away with on account of insufficiency. No single book, as yet, has come anywhere close to doing it service; nor could a 200 page book on, say, *science* hope to scratch the surface of its titular subject. So allow me to sub-title or sub-categorize this one.

David and Joyce, from what I can tell, and compared to others in my personal sample set, are so-called *un-schoolers*. That means they believe, almost fanatically, in child-led exploration and learning.

Unschoolers believe it paramount that kids learn at their own self-regulated pace. So if they don't read until they're 10 - then so be it and don't sweat it. Because it's far more important, in their eyes, to keep the learning process *pure*, i.e. devoid of coercion and incentives.

Okay. So why am I reading and lauding the pontifications of my critics?

Well, because I don't believe they are directing this book specifically to me, at all. Their message seeks a wider audience of government school parents, young homeschool parents, veteran homeschoolers, and potential homeschoolers. Few adults out there have the same situation I have: kids with superior genetics and probably the best teacher on this planet - a hero who can magically make long division with decimals fun, interesting, and relevant even for little squirts!

And with that goal in mind, the book has been well-sculpted as an inspirational masterpiece.

While many have chosen (and will continue to choose) to educate their own *outside the system* on account of a bad school experience, because of so-called special needs, for lifestyle reasons, religious calling, or, like me, because they believe an individualized education in the comfort of home is superior to every other method....David and Joyce take it up another notch or two. They truly believe that homeschoolers can improve global health. They're going to save the planet!

Normally, in this space, I'd mock the socks off anyone making such claims and I'd out them as dissembling power and money seekers.

The fact is, optimally raised homeschoolers won't slavishly pick up the newspaper or go to CNN.com everyday to *receive* their intellectual and emotion orders. Essentially, everything churned out by Big Media boils down to *propaganda* from regnant institutions: political parties, unions, Big Business, the college/university cartel, Big Military, organized eco-pagans, et al. So it follows that only truly independent thinkers will be able to come up with outside-the-box solutions and prescriptions for larger societal problems.

It's a nice little cynical and self-aggrandizing theory, right?

Following our trip to south India to aid in some small way in tsunami relief efforts in December, 2004/January, 2005, my older daughter Aliyah decided she needed to return in the summer to feel she had completed her part of the job. She raised the necessary funds herself and took off for Asia. She spent a week in Cambodia with that nation’s only child psychiatrist, who is training the country’s entire child mental health workforce (the previous one having been physically eliminated by Pol Pot in the late 1970s). She met with an old graduate school friend of mine who gave up a promising academic career to (among other things) set up hospices in Phnom Penh for those dying of AIDS. She flew on to south India, undertaking for nine weeks to document the efforts of the land reform/house building organization working with the poorest of the poor, and with whom we had contributed our time and energy six months previously. Then she moved on to Bangkok, visiting with an organization that is training Buddhist monks to help individuals and communities heal from the trauma of the tsunami, which is still very fresh. And now, having returned home, she is working to set up an internship for herself in Italy with a group that does Third World development-related work.

Wow, right? It sounds like she's going after after Mother Teresa's records as a young Tiger Woods sighted Jack Nicklaus!

Now, would any of that (especially the imagination and travel) be possible if the young lady's time and priorities were co-opted by *schools*?

BTW, Albert's other daughter volunteers at animal shelters and organizes piano concerts in furtherance of Mid-East Peace and whatnot.

BUT, he really only, in exposing the sordid history of government schools, taught us the *why* of the homeschooling question.

Since he himself was childless didn't homeschool(?), we need others, trailblazers like Albert and Reed to teach us the next step, the *how to* aspect.

I guess the appeal of What Really Matters - for me anyway - is that it successfully bridges this important gap.
Posted by CaptiousNut at 9:44 AM

Thanks for the review. For the record, John Holt was childless but John Taylor Gatto is not. A letter he wrote to his grandaughter about college has been published in one of his books and in our Life Learning Magazine.

You better have YOUR "How-To" published by the time I start with my brood because I've got the superior genetics thing in the bag but I'm not sure I yet know how to make long-division fun! (I'm not even sure I know how to do it anymore)

Btw, what do you think is the quickest, most severe way to turn a drone-child around and put him on a path of learning and self-development? My little "squirt" from the BBBS program has gone dullard-max on me-- I haven't seen him for a month now, the last two times I called to take him out he informed me it was his "lazy day" and he would prefer to sit around relaxing... in front of his TV and PS2, no doubt.

This kid is 7, much too young to be relaxing. I wanted to yell, "YOU CAN HAVE A LAZY DAY AFTER YOU TEACH ME SOMETHING I DON'T ALREADY KNOW YOU LITTLE...."

Thanks for that correction.

For some reason, I had in my head that he was a lifetime bachelor.

And I do recall that terrific *letter* which is also in Weapons of Mass Instruction.

If you see a kid that infrequently....it's probably not near enough to do too much. Lower your expectations; do the best you can.

I am SO glad that you do not have self-esteem issues! ;)

You do have something going here that you can see the value in a book written by those who have such a different home-schooling worldview than you do.

There is a lot of room in the "home-school" world for countless different approaches. And you are right, the moniker "home-schooling" is so narrow. But what can you do?

I will add, briefly, that one thing I have found distressing is the (I believe, recent) panning of "home-schooling" by unschoolers. I have found myself simply turning off some unschoolers because they seem bent on denigrating the efforts of anyone who doesn't do it the way they do it (i.e. child-directed). I'm open to ideas. I am not open to being told I am just like the school down the street because I don't "unschool."

The unschooling argument is theoretically compelling.

BUT, I've actually done my best to research it.

That unschool has been open for 40 years....and I don't know that it's graduated a Bill Gates type or anything. If it was so optimal, one would expect several of him, no?

Sudbury is a school. An alternative school, but a school.