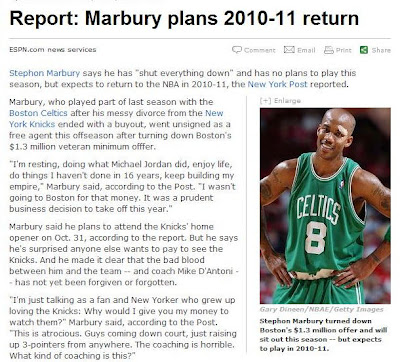 Click the graphic to enlarge, or read the story here.

The reporters provoked him to take shots at the Knick, and he obliged:

Marbury said he plans to attend the Knicks' home opener on Oct. 31, according to the report. But he says he's surprised anyone else wants to pay to see the Knicks. And he made it clear that the bad blood between him and the team -- and coach Mike D'Antoni -- has not yet been forgiven or forgotten.

"I'm just talking as a fan and New Yorker who grew up loving the Knicks: Why would I give you my money to watch them?" Marbury said, according to the Post. "This is atrocious. Guys coming down court, just raising up 3-pointers from anywhere. The coaching is horrible. What kind of coaching is this?"

Marbury also predicted that Cleveland Cavaliers superstar LeBron James won't join the Knicks as a free agent next summer, according to the report.

But Stephon....when the Knicks were paying you $20 million per season, they were built to neither win a championship NOR make money, Moron!

I saw him play every game last year for my Celtics. And I can't believe they made a sincere offer to him. He was a complete non-entity out there on the floor. A $1.3 million veteran contract, I believe, is 100% picked up by the League anyway.

I mentioned Marbury last year in - A Little B-Ball

And that OTHER dissembling retiree this month? Well that was my buddy atop Bank of America. See - RIP - Ken Lewis.
Posted by CaptiousNut at 12:19 PM