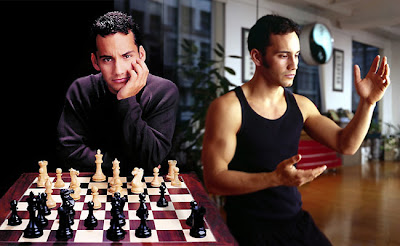 So who is this dude?

It's a fella by the name of Josh Waitzkin.

There was movie about him some 17 years ago titled - Searching For Bobby Fischer.

Yes, he was the genius little kid that starting winning national chess championships at age nine.

After chess, he took up Tai Chi and went on to win national and world(!) championships.

The past two days I've been consuming his book - The Art of Learning: An Inner Journey to Optimal Performance

- in which he covers the seemingly disparate endeavors.

OBVIOUSLY, he's one freakish, talented individual so that in and of itself makes his story compelling.

But I was additionally captivated because:
Now the book isn't the best I've ever read - perhaps a little too fruity with his *zen* and whatnot and perhaps more suited towards the genetically-gifted than the self-made - but still, I couldn't put it down.
Posted by CaptiousNut at 4:54 PM

And going by the picture you posted...he's also hot. Not something that you would notice but as a red-blooded American woman, I noticed.

And not the first time you've mentioned your *red blood*!