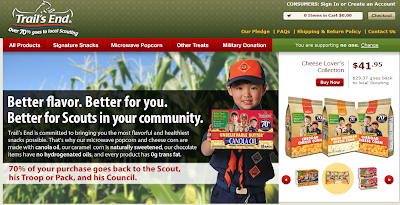 They are selling *fancy* popcorn as a fundraiser.

But, guess what, I have a serious problem encouraging him to get out there and SELL.

You see the 3-pack displayed above? They are mere 8 ounce packages of cheese popcorn.

LOOK AT THE PRICE!!!

Actually, they are a little cheaper if you buy from a scout - the bargain price of only $30 total.

In fact, the cheapest item on the roster is 11 oz. of caramel corn for $9. Then the choices ramp up fast with the next cheapest item being $16 for 20 oz. of butter toffee popcorn.

My wife just dressed the Prince up in his scout uniform and took him to see the neighbors.

Get this - one bought bought $16 worth and another bought $56 worth!

THEN, someone driving by on the street stopped them in their tracks, asked to buy, and went for a freakin' $40 order.

Oh yeah, at least one of the neighbors was also charitable enough to buy a pumpkin ($10) from the Prince. Last week his grandmother bought about 20 pumpkins out in the Hamptons for him to mark-up and resell out in front of the house. Last week, in about two hours time, I believe he sold 12-15 of them is now firmly in the plus column.

Not for nuthin' but these old New Yorkers have waaaay too much money - piles and piles of it.
Posted by CaptiousNut at 3:07 PM