Yesterday we took the kids to the Aquarium on Coney Island. That area, I leaned, is not actually an island. It's just the beach on south central Brooklyn.

The aquarium was fine because it was free and because my kids liked it. We joined the Bronx Zoo a couple months ago and that pass gets us into the aquarium with free parking (an otherwise $57 value).

After that we walked a couple hundred yards down the famous Coney Island boardwalk - something I'd never done before. There were plenty of rides, games, weirdos, beer, and fried food there. I felt compelled to buy a hot dog at the *world-famous* Nathan's but wouldn't recommend that to anyone, EVER. The service there might have been the worst I have ever seen in an eatery in my entire life. It took me 20 minutes to get through a 5 person line FOR HOT DOGS.

Yeah, and the hot dog sucked too. Anything off your grill (or out of your microwave!) will taste much, much better.

Now check this out: 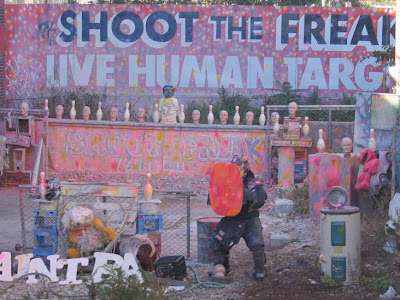 That was an alley of sorts on the boardwalk. In it was a *freak* whom you could fire paintballs at for a small fee. I imagine the guy who dreamed up the idea and who collects the money ($5 for 15 shots) reaps a tremendous profit.

Boardwalks (Venice Beach, Wildwood, Atlantic City, Nantasket Beach, etc.)  are always rich *people watching* environments. There was some nutjob with a distended stomach in a speedo cussing everyone out who walked by. There were the typical clueless foreigners - one wearing a zipped-up jacket and scarf in 80 degree sun; another in front of me in line at Nathan's ordering cheese dogs when they wanted *cheeseburgers* and trying to pay with euros or traveler's checks or something. There were plenty of topless, tattooed old men; and Italians wearing wife-beaters that sat perfectly suspended on lush back hair. I saw one guy at Cha-Cha's dump a full beer over his head and chest in an effort to cool off. And there was also a queer threesome there pounding adult beverages, having a very animated discussion, and trying to groove in their seats at 3pm on an October Saturday afternoon. One was a suburban looking Italian guy; another was an ultra-grungy bike chick; and the third was a black bodybuilder chick WITH a mohawk!

I wasn't on the boardwalk for more than 30 minutes either.
Posted by CaptiousNut at 4:25 PM

So John Rocker would love that place, huh?

I guess you inlanders don't really have boardwalks...

The fringe of society for fringe people!

But, I have been to the French Quarter in the daytime. It is a freak buffet.