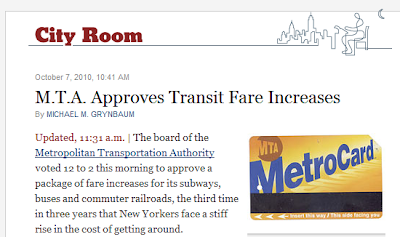 In a couple of months, New Yorkers will get slammed with huge train and subway fare increases.

Using the subway will cost 17% more in January.

And tickets on the commuter rails (Metro North and Long Island Railroad) will jump an average of about 10%.

Recall also that they recently raised the parking fees at my wife's train station outside of Boston; they raised it by $2 a day or $500 for the entire year!

Electricity bills here in NY are already slated to rise 12% over the next 3 years.

Credit card companies and banks are sliding all sorts of new fees onto their customers.

Property taxes have continued their inexorable rise; as has college tuition.

Health insurance rates are still creeping up AND they are also finding inventive ways to JAM their customers. Recall the $500 co-pay they hit me with for my knee MRI.

Remember when cable TV installation/wiring used to be free? You know, because they were going to recoup that investment in spades, right off the bat?

Well, I had Verizon FiOS expanded here - actually it was already fully installed upstairs - so all I had the guy do was wire (re-wire) one bedroom and drop another router into the basement. Guess what...

No one, in the course of ordering the expanded service, said a word about *cost*. I just assumed it would be free - as it had been throughout my lifetime.

Also, the cost of *saving* has skyrocketed because money market interest rates are around 75 basis points. In this same vein, the cost of saving for retirement has also INFLATED by 10-20% via the furious bear market stock rally. Think about it. Y'all are investing in the DOW at near 11,000 when you could instead be buying shares closer to 8,000 - where it's inevitably going.

And yet somehow, these reality-inverters stand up and assert: 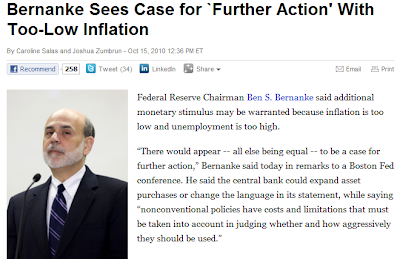 They have the balls to say there's no inflation!!!

Sure, some things have in fact gone down in price BUT they are mostly in the unnecessary or frivolous categories: iPods, pleasure boats, commercial real estate, Floridian condos, etc.

Bernanke obviously subscribes to the theory that if one going to lie, they may as well tell a REALLY BIG ONE.

See also my post from three years ago - What Inflation? - Soybeans and the Lying CPI.
Posted by CaptiousNut at 3:14 PM

Dang, Congress already invented some inflation when they jacked up minimum wage three years straight. Seriously, the folks in DC are completely removed from reality.

Inflation is the only way that I can account for the DJIA continuing its upward climb. Am I wrong?

USA and dollar seems to be so screwed up that only question is: are precious metals perform similar to real US inflation or it's another bubble? Is it a way to preserwe wealth or aothrt esy to loose it?

If I KNEW where gold was going I'd be *all-in* with a bet on it.

Gold is best played as a hedge. Buy a little and if the world ends you'll be somewhat better off.

And one of the long-time goldnut bull arguments has been...

That if just everybody who rightfully should hedge say 5% of their net worth did so with bullion....the metal's price would explode.

That's because there's really just not that much of it, physically-speaking.

No one really knows why the markets do the things they do.

And no one can or will be able to PROVE their theories.

Inflation, as you say.

Realize that we've had almost ZERO IPOs in the past decade. Why is that? Well because promising companies no longer need to go to the stock markets to raise capital. Think YouTube, Twitter, and FaceBook.

So with no new issues, there theoretically has developed a *scarcity* issue on Wall Street. Something crazy like 75% of hedge funds allegedly on Apple right now. (Shades of 2001 when 75% of all mutual funds owned Cisco.)

With the supply of stocks down, prices have nowhere to go but up, right?

It could be that simple.

But again, I have no idea either.

I'm just sure that whatever is truly driving the averages higher is laughing at human explanations.

There is no doubt there is clandestine government buying. Where else would all that money be going? Light rail?