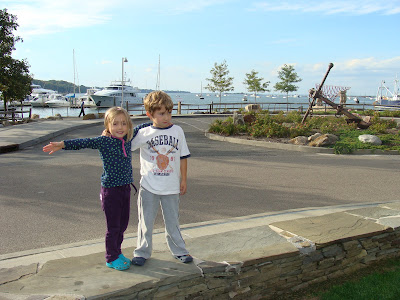 Yesterday I shuttled my son 40 miles west to the Port Jefferson Children's Maritime Museum for a new *science* class. Here's the description:

It might be a bit of a haul to get there, but: 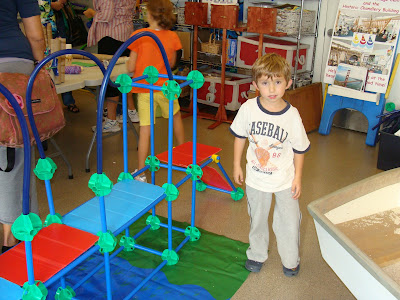 The first class, aside from the 80 minute drive home in incipient rush-hour traffic, went pretty well.

On another note, my homeschooling philosophy is starting to evolve a bit. More and more I find myself *slacking off*, just leaving my kids to their own devices during the day. I've cut the 1-on-1 math down to maybe 20 minutes a day with each of them. And I still do assign my son to go in his room and read at least twice a day.

However, the day is pretty long - almost 14 hours to be precise - and most of that time my kids are now doing things on their own. For example, the past 3 days they've both been glued to Kerpoof.com - a great site which one of my readers recommended. There kids can compose pics, stories, and movies via drag-and-drop and whatnot. Actually, I'm not entirely sure that's what the site is about because I've only glanced at it a couple of times. But whatever it is, they are pretty engaged by it.

Recall *unschooling*, in its most pure form, is almost an anything-goes educational approach. Many unschooled kids even play video games all day long with their parents confident that they will benefit from following their own passions whatever they may be.

While I'm not quite there yet, I can definitely see things in this household trending in that direction.

On top of that, the general vibe I get from veteran homeschoolers and their literature is that most all of them, as time went on, helplessly evolved into unschoolers.

Look, yesterday my 5.90 year old son told me that *area and perimeter were boring* and that he wanted to *learn calculus*. Also when his book club (he and one other girl) chose a 197 page book (Henry and Beezus) to read together....he finished in less than a day!

So what am I going to do? Make him start calculus now? Make him read 300 pages a day?

Heck, it's getting to the point where I could seemingly work a full-time job AND homeschool.

Take that(!), all you scoffers who think homeschooling a *sacrifice* with trade-offs.
Posted by CaptiousNut at 12:11 PM

Ah well, in the future I will be posting about my own home-schooling philosophy which is often called in the home-school world: relaxed home-schooling. Not unschooling per se but certainly not a rigid following of someone else's idea of "curriculum." I spend less than an hour a day with my 8-year old, and some days it's a lot less. But he is super-creative so I just let him create. For instance, his older siblings taught him to use PowerPoint when he was five, and now he'll spend hours creating elaborate PowerPoint presentations. He even adds music now. My older kids only taught him the bare bones, everything else, all the effects he adds, he taught himself.

As you say, most home-schoolers gradually evolve to a more relaxed approach. Allow me to welcome you to the ranks!

could u post your 5 week schedule with your homeschooling...if there is one. thx.

We still do a ton of work by default since the color TV is off and their aren't a bunch of other rascals in the house all day. No stupid *playdates*; mine have to play with whomever is at the park, when we go in the afternoon.

What....so you think I'm on a lunar-tic cycle or something?!

Don't have a plan outside of Kumon books, computer time, some sketching (not enough), my own math worksheets, tons of computer time, and tons of reading.

Of course what we do with each kid is evolving constantly.

At some point I hope to put it all together and post EXACTLY what we did and are doing.

you probably got it...it was a mistake :) i was asking 5 day week schedule.

yep that would be nice. but i understand u probably wont repeat the same 5 day schedule the next week, and probably dynamic , changing often as needed.

We homeschool SEVEN days a week, 52 weeks a year.

And the continuity if very, very important.

My wife is home Fri-Sun and she cracks the whip (on the edu-front!).

you guys are egotistical morons - i like how you're "gradually" becoming lax - sounds like you're getting lazy or over your head - sounds like you don't know how to challenge him - be honest with yourself about it - one of your readers says he only does an hour a day with his kid but it is really creative blah blah - why can't he do the hour a day outside of school - you say you homeschool 52 weeks a year seven days a week blah blah - you act like other parents don't spend time with their kids outside of school - of course parents need to supplement outside of school - you could have gone to the science thing on a weekend right? sounds like homeschooling is more about your schedule than the kids' development

Why should my kid waste 8 hours a day in school when I can teach him everything he needs to know, at the age of 8, in an hour a day?

In case you think I don't know what I'm doing: I have home-schooled for over 20 years. My two oldest children have college degrees; my daughter has a Master's degree in Forensic Drug Chemistry. I home-schooled her from first grade on.

so... you're "proving" your case by accomplishment in the same system that you're saying is flawed? huh?

do your kids have friends? do people like them?

regardless of the answers-ask your own kids how you're doing - and ask them to be honest - especially if they're adults - my bet is they wouldn't have wanted to be homeschooled - that they could have risen above anyway. it's unprovable, but that's what i'm willing to bet

i agree the public/institutional system is incomplete and flawed - that's why i "homeschool" to supplement.

why are you so proud that with an hour a day, you are getting the same education for your kids? you could do the same hour outside of school, right?

"Unschooling"? Uh, the word you are searching for is "Montessori".

It's a far more widely established and utilized description in homeschooling circles - by orders of magnitude to boot.

In fact the ONLY time I've hear homeschoolers use the word *Montessori* has been in strict reference to pre-school.