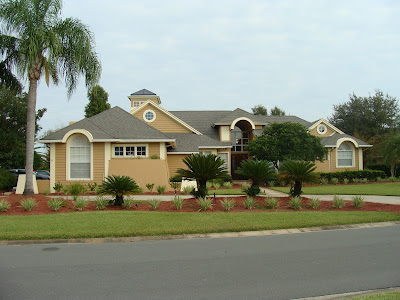 Alright, I'm back from a fun-filled and successful golf trip to Tampa.

That's the house we stayed at. One of my jabronis bought it last year from a bank (i.e. foreclosure) for 425k. It was pretty darn nice.

Things were/are so bad down there that he also was able to join a decent country club for the bargain price of $5,100 FOR THE NEXT THREE YEARS. That's not *per year*....that's total or $1,700 annually! (A cart is reasonably priced at $20.)

Then I blew up on day 2 at the TPC Tampa Bay - shooting something in the low-mid 90s. My driver simply deserted me. I wouldn't recommend this course to anyone for the ludicrous $105 that it cost. It was not even really worth $60, IMO.

On day three I found my form to an extent. I shot a 78 at World Woods ($52), a terrific course some 50 miles away from where we were staying. The round should have been much, much better because I three putted 5 times in the first 11 holes, and really didn't get up and down all day long.

On day four lethargy/apathy set in. I floundered yet again, posting an 87 at Cheval before rushing back to catch my plane.

Not for nothin'....but my short game flat out stinks. I can get by with it so long as I play often, but that's a non-ideal solution to fundamental flaws. 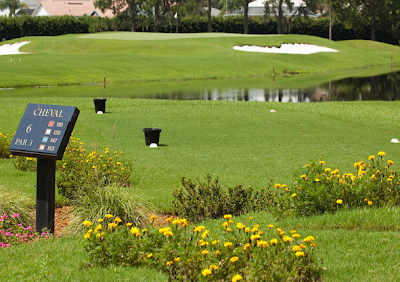 The weather was phenomenal - around 86 degrees and sunny all weekend long. The Ryder Cup was on color TV so we enjoyed watching that.

On Saturday night we went to Bern's Steakhouse - which was a fantastic experience I'd recommend to anyone at least once.

Sunday night was the only time we really went out to booze....at the LA Hangout Bar. It was quiet but looked like it could be fun for a Friday or Saturday night. Next year...
Posted by CaptiousNut at 4:30 PM

Sounds like you need to start hitting the wedges with the 40k ball subscription. Man, I am envious, though.

At my range sessions, I hit mostly wedges and 9-irons - and I hit a fair number of 50 yard punches.

But there is no practice area, not even a putting green at the course that I can use.

They have one down by the first tee and golfers are only allowed to use it right before they tee off.

So I chip and putt in my basement when I can.

We have the same problems in Mississippi with practice facilities. I have never understood that either. Maybe the maintenance is too expensive to keep short range practice areas in good repair?