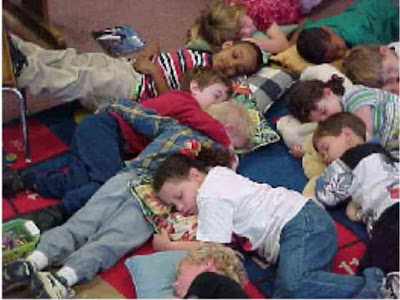 With a mid-November birthday, my son, the 5.92 year old Prince, is on the kindergarten/1st grade threshold.

If we stayed in Massachusetts, he'd have missed the *be 5 by September 1st* cut-off date for kindergarten last year. Although here in New York, he'd have just made the November 30th cut-off and been legally eligible for 1st grade this year.

However, almost all parents of boys his age end up *holding them back* a year so they go from the youngest in their class to the oldest. In fact, I don't think I've met a single one yet whose child was born close to the cutoff and opted to NOT HOLD THEM BACK.

Furthermore, I've met plenty of people whose children (mostly boys) were born as early as JULY and have still decided to hold them back a year. And I'm not here in *football country* either - where priority-deficient parents are purposely deferring their kids' education so they will be *that much bigger and stronger on the football field*. (A real phenomena in many parts of America!)

Though even when the parents are relieved of their children (liberated for shopping, yoga, and tennis) another *monumental* choice presents itself:

Ooooooooohhhh....don't want to mess up this decision...

Most people I know go for *full-day* even though it might cost money. Hey, if both parents work it's a freakin' no-brainer.

Though, guess what - in Massachusetts anyway, these kindergartens are apparently LEGALLY BOUND to NOT TEACH the full-day students any more than they teach the half-day ones!

So they drag out the full-day with naptime, recess, snacks, and other extra-curricular activities.

C-Nut, with a step-kid in the seventh grade, I am just now seeing the exact extent of the degradation of our public schools. Do you know that here in Lexington, the kids do not even use BOOKS? They are given their daily assignments on one sheet of paper. Four of the boy's classes have had ZERO homework for the entire year.

Oh, in case you think that this school simply has to suck, according to the actual rankings, the school boy attends is allegedly the third best in the entire state.

It is stupefying. Seriously.

But, generally speaking, homework is a sign, an admission, that they haven't been able to teach the kids anything in the 6 hours the government agents have had them.

I believe you that the school stinks - just not on account of a lack of homework.

As for *books*, I've heard of some schools that don't use books much or that don't allow kids to take them out of the classroom because they lose them or continually forget to bring them to class.

And getting back to homework...

I know a teacher on Long Island who doesn't assign homework because *the parents do it*. Seriously.

Whatever the failings of the school are, one thing is certain - THEY ARE A MESS. And they can't be fixed, only scrapped altogether.

Here it is in a nutshell. Boy is told to bring a book to read to class in every class. Half of the time that is what he does. We are now in mid-October of the seventh grade. In Algebra, they just now learned what a variable is. In history, they are watching movies almost daily. In Reading and Writing Lab, they are finding out what declarative sentences are. Science is a horrendous joke. Dude, third best school in the state.

By the way, the only reason that we sent him to public school is so he could meet more kids in a new town. The private school that we wanted to send him to only had seven kids in the seventh grade.

I swear that the public schools are useless. I kinda knew this when I had to take my kid out of public school in the fourth grade.

Did I even mention "Barack Obama Day?"

What is inherently wrong or worse about a 7 kid school?

We are also *new* in town. Mine have to meet others organically - at the park, down the street, kids of parental friends, etc.

Another time the groundless socialization argument wins out is in families of *only children*. If the kid is naturally shy or quiet the parents get worried.

Meanwhile, most of my relatives wish I were a little bit quieter...

The step-kid ideally should have a sufficient amount of non-school activities to supply the necessary socialization time.

But that's what happens. School ends up co-opting so much of a child's life....that parents expect it (an arm of the gov't!) to cover everything: academics, behavior, socialization, fun, etc.

And it's doing a SWELL job!

He is an only kid and he is also very awkward socially. There are plenty of kids in our neighborhood, but his demeanor is very aggressive, too. He kinda puts the other kids off a lot of the time. That was my reasoning behind putting him in the public school where there would be a greater potential friend pool. I was under the utter misconception that he would receive some form of education at the same time.

I was very, very wrong. Dang, I had no idea how bad schools had gotten since my last taste of it around nine years ago. It was BAD then, but I had no clue how much the standards had fallen in such a short period of time. I am certainly rethinking the education part of the equation now.

C-Nut, the stuff I have seen in the Algebra class just dumbfounds me. They are not even trying to teach the kids that variables are NUMBERS. Boy is having great difficulty removing the bad stuff that he is being taught and to actually grasp the very basic concepts. He was in private school last year, but I was not really involved with his lessons then, so I really have no starting point for comparison.

Being a single parent with my own kid, I got involved early on with the playdates and stuff with our church. I am behind the curve right now, but I am certainly going to catch up quickly. I am just out of damned practice, it has been a while for me.

Oh, as far as out of school activities, the danged school day doesn't start until nine and ends at four. With only five hours after school before bedtime, one hour of actual teaching daily from me, the evening meal, bath-time and whatnot, there is just really little time for out of school activities during the week. I guess I could get him out of bed at five am, but what the hell would he do then?

This conversation also brings up a point someone else raised in a different thread:

If you (meaning me) only spend 1 hour a day on work, then why can't a parent just *supplement*?

Well they can, early on.

But once homework comes (1st-2nd grade?), the window of opportunity to do so narrows.

Kids need time to prepare for school and time to unwind from it. Add to that the commuting time/energy (which can be substantial for some) and free time (to do anything!) is gone. In fact, a parent may as well cross off entire weeks and months of every year - because that's the reality once committed to the *school* life. All of this you well know.

Mine slept in a little today and are, at 11am, still in their pajamas and messing around with kerpoof.com.

Boy is twelve. I do not let him leave his bedroom without pants (not jammies) on.

I am really behind on this kid and I am having to really ramp things up with him to get him caught up.

My standard? Andrew Carnegie was a runner for a newspaper when he was eight.

It's nice that you spend that time with someone else's kid.

I remember, years ago, when I first moved up to NY. I tried to set up a regular routine where I would help my nephew with his homework.

It lasted all of 2 weeks.

I don't think that it is necessarily being nice, I am trying to avert the "he steals my car and plows it into a drive-through with five kilos of weed in the trunk."

Gotta do what you gotta do.