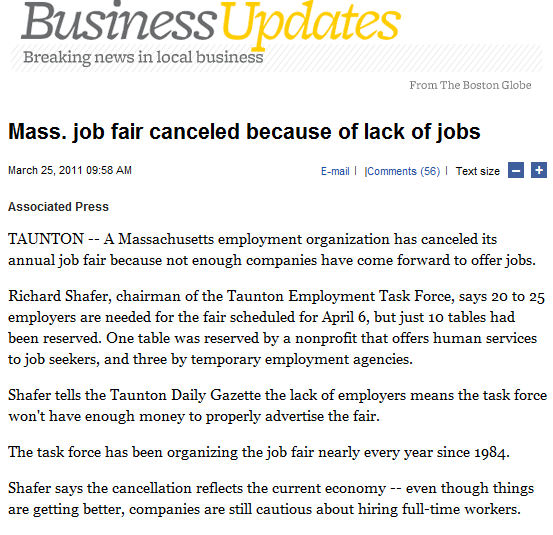 I like how the guy in the article states, "...the cancellation reflects the current economy -- even though things are getting better, companies are still cautious about hiring full-time workers."

Do y'all remember the expression *jobless recovery*?

Throughout the earlier part of the previous decade, when the other party controlled Washington and when employment was SUBSTANTIALLY HIGHER,....that was all we heard about - how we came out of the recession *with no jobs*. It was Big Media agitprop aimed at their political enemies.

But nowadays all I hear from the same, now regnant crowd is how *things are getting better*.

That's total bull$hit. Taxes, tuitions, healthcare premiums, food prices, energy prices, etc. are ALL HIGHER. Meanwhile unemployment and underemployment are at the worst levels in decades. Debt is at nosebleed levels and mortgages are all underwater.

The only things that are better are the mercurial stock and bond markets. While I understand if one is in the *skim biz*/Wall Street they are in fact doing terrific, but most of these buffoons waxing optimistic are not in that category. They run job fairs that have to be cancelled; they sell homes (one a year!); and they write for imploding Big Media organs.

In his new campaign ads, President Bush speaks warmly of a nation on the rebound, with a growing economy that's producing jobs. But the America that Bush sees is not the reality for millions of workers, especially in the middle class.

The federal government's latest employment numbers are, again, dismal. The U.S. added only 21,000 jobs in February, less than one-tenth the monthly increase the country needs to stay even. Unemployment held at 5.6% - but only because almost 400,000 people fell out of the statistics when they stopped looking for work.

Against that bleak backdrop, Bush began his campaign against Democrat John Kerry with commercials touting his leadership through hard times - 9/11, a sinking stock market, a recession. Suggesting that better days are just ahead, he puts a decidedly optimistic gloss on the pocketbook trouble of average Americans.

They were bemoaning 5.6% unemployment!!!

And before that, in May 2003, they were bemoaning 6% unemployment: 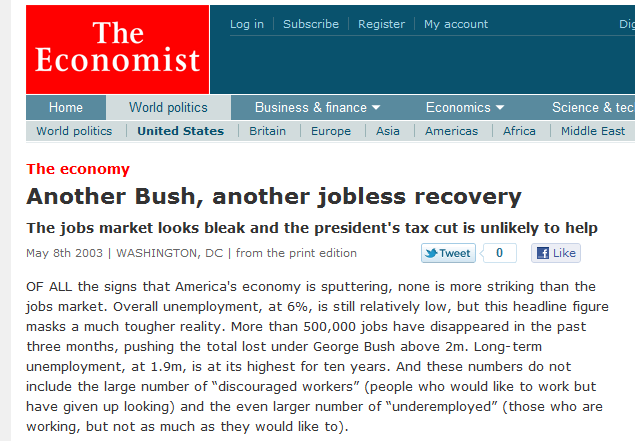 Posted by CaptiousNut at 4:31 AM

buffet says its recovering. all is good...bears already in hybernation for atleast 3-6 months now.

i think we will soon start seeing initial phase of another bubble.

Something will set it off soon, just you watch.

That fossil Buffet can't find his glasses or pee without getting his trousers wet. He sold all his silver at $5 and was short the NASDAQ bubble way too early. He will most certainly, when it's all said and done, go out *at the bottom*.