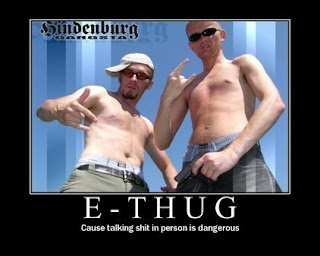 Recently, in - YouTube Overshooting - I expressed my frustration at Google/YouTube for their accelerating *copyright* enforcement.

But it's tough to really blame them given the diversified and unrelenting legal assault on them from interested lawyers and competitors. As Microsoft found out, bigness and wealth attract shakedown artists like honey does flies.


Google's won the first round of the enormous lawsuit Viacom brought against it. Viacom is suing Google for $1 billion for not having copyright lawyers inspect all the videos that get uploaded to YouTube before they're made live (they're also asking that Google eliminate private videos because these movies -- often of personal moments in YouTubers' lives -- can't be inspected by Viacom's copyright enforcers).

The lawsuit has been a circus. Filings in the case reveal that Viacom paid dozens of marketing companies to clandestinely upload its videos to YouTube (sometimes "roughing them up" to make them look like pirate-chic leaks). Viacom uploaded so much of its content to YouTube that it actually lost track of which videos were "really" pirated, and which ones it had put there, and sent legal threats to Google over videos it had placed itself.

Other filings reveal profanity-laced email exchanges between different Viacom execs debating who will get to run YouTube when Viacom destroys it with lawsuits, and execs who express their desire to sue YouTube because they can't afford to buy the company and can't replicate its success on their own.

Read the rest of it here.

Hmmmm....Sending legal threats over videos Viacom had uploaded itself?

Here's hoping that Viacom's business gets decimated by the digital, internet revolution!
Posted by CaptiousNut at 4:58 AM

If you think that You Tube sucks, you should put up a new video today, you can add a vuvzuela button to make that awful soccer noise.

If you were wholesaling those horns....you'd have a completely different opinion of them!