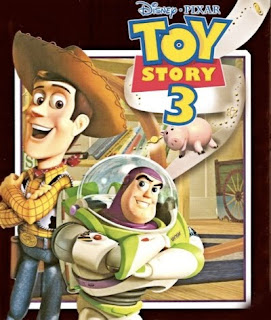 A local big mouth vociferous NY guy, who I recently mentioned in another post, proudly told me that he had *already bought the tickets* for his kids to see Toy Story 3. (The movie was just about to be released amid much hype.)

Frankly, I don't understand WHY a four year-old (the other kid is 2!) has to see an animated motion picture right when it premieres.

I mean, seriously, has anyone on Earth ever missed a blockbuster movie because they didn't secure tickets, the showings were all booked, AND then discontinued?

Is he afraid that the other 4 year-olds at his son's daycare will be hitting his kid with *plot spoilers* or something?

And I most certainly don't understand a parent essentially bragging about this foresight or at least publicizing the stupidity which this action constitutes.
Posted by CaptiousNut at 7:35 AM

I agree with you on opening night/premiere-week viewings. Totally, totally pointless. It's a lot of stress and wasted time waiting in line when you could just wait a week and see it stress-free then.

I liked "Moron Story 3" as you call it, however: http://conant.economicpolicyjournal.com/2010/06/libertarian-toy-story-3.html

What did your date think of the flick?

She teared up at the end. She was touched.

But she loved it, too! Was laughing the whole way through like me and everyone else in the theater.

Is this any worse than the people who sleep out all night for the privilege of waiting in line all day to buy an iPhone?

Especially when you consider that you can walk in the next day and have every geek in the place fighting for the opportunity to sell you one.

I'm sure guys have them. It's just that EVERY female in my peer group has one. I've never seen a late 30s *mom* with a Droid.

The whole Apple thing, the quality of their products aside, has always reeked to me of groupthink.