This is an actual sign down the road from me: 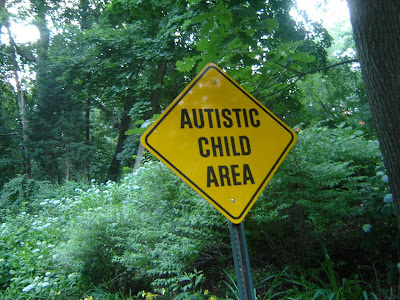 The other day I blogged on the dilemma of getting my kids those MMR booster shots - as mandated by Big Government apparatchiks.

Here is a great must-read article on the subject of vaccines. I'm only going to excerpt the beginning, but please click through and read the entire piece:

(NaturalNews) The American Academy of Pediatrics (AAP) has gone ballistic over a fictional television program airing on ABC that shows a family successfully suing a vaccine manufacturer for their child's autism. Not satisfied to push dangerous vaccines onto children in the real world, the AAP now feels it must also control the thoughts and ideas of people living in fictional worlds by pressuring television networks to censor their programming. Only television shows that conform to the pro-chemical, pro-pharmaceutical, pro-vaccine point of view will be tolerated by the AAP, it seems.

A letter signed by AAP President Renee Jenkins warns ABC that it will "will bear responsibility for the needless suffering and potential deaths of children from parents' decisions not to immunize based on the content of the episode." This is tantamount to saying that ABC's television program will kill children! The AAP letter goes on to state the usual conventional medicine propaganda line that there is "no evidence" of any link between vaccines and autism.

Of course, that's only true if you limit your "evidence" to whatever dogmatic beliefs are currently being circulated in the minds of the promoters of western medicine. To these doctors, there's no such thing as a dangerous injection, drug or synthetic chemical! It's all safe for children: Mercury fillings, chemical fluoridation of water supplies, 37 different vaccine injections, antibacterial soap in children's toothpaste... need I go on? The American Academy of Pediatrics seemingly hasn't met a corporate-sponsored chemical it didn't like.

Not stumping for organized medicine here, but I wouldn't put any time into following the rants of the group you linked to.

The frustration of parents with autistic kids is severe; there is a strong desire to blame something, because it couldn't be random could it?

There is also a tendency to blame it on one thing, but this is unlikely to be proven true.

However, if you(or I) had to blame it on one thing, why not pick the decline in Vitamin D levels in broad populations? I think there is much more to that as the major contributor than vaccines. Fire away!

But historically, it's not random.

Not to brush aside your Vitamin D hypothesis, but there's a whole lot more than cynicism to the fingers pointing toward vaccinations.

BTW, the group you want to dismiss...

That guy Mike Adams says this about Vitamin D:

Vitamin D is perhaps the single most underrated nutrient in the world of nutrition.

In fact I've heard more than a few of these loony health wackos, the very type who look askance at vaccinations, sing the praises of Vitamin D.