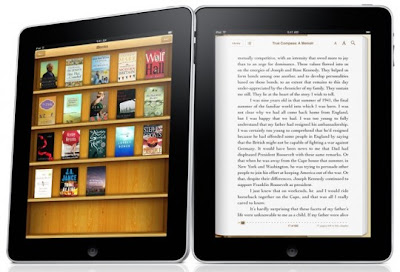 I'm seeing it more and more these days - people, especially bloggers, are writing and peddling their *ebooks*.

So why is that?

Consider this recent article from the WSJ:

This month, Amazon is upping the ante, increasing the amount it pays authors to 70% of revenue, from 35%, for e-books priced from $2.99 to $9.99. A self-published author whose e-book lists for $9.99 on Amazon's Kindle e-bookstore will receive about $6.99 for each book sold. The author would net $1.75 on a similar new e-book sale by most major publishers.

The new formula makes digital self-publishing more lucrative for authors. "Some people will be tempted by the 70% royalty at Amazon," Mr. Nash says. "If they already have a loyal fan base, will they want 70% of $100,000 or 15% of $200,000 for a hardcover?"
Traditional book-industry players and tech companies are jumping on the digital self-publishing bandwagon. Apple last week announced a digital self-publishing program for its iPad giving 70% of revenue to authors, similar to Amazon's formula. Last month, Barnes & Noble also announced a service called PubIt!, allowing authors to post and sell e-books online.

Here's one example of the math:

Mr. Konrath says he's already earning more from self-published Kindle books that New York publishers rejected than from his print books. In the past 14 months, he has sold nearly 50,000 Kindle e-books, and at the current royalty rate, he makes $58,000 per year from his self-published works. When Amazon royalties double this summer, he expects to bring in $170,000 annually.

Y'all catch that....making MORE from the content gatekeeping publishers rejected!

With margins this high, there're plenty of nuggets out there to be mined.

The other day my brother, who was thoughtful enough to email me this article, informed me he was considering writing an ebook on how Westerners can launch businesses in the former Soviet states. This happens to be his area of business experience.

I thought about it for a second, wondering how big the market for such a book might even be. Then it hit me that the targeted customers would certainly be willing to pay-up for this kind of book before dumping substantially more money into the scary *outlaw economies* over there. My brother could easily price his book at say $100 and given the current ebook margins he'd only have to sell 1,000 copies to net around $70,000. That's not too bad at all.

Surely, given the explosion in iPads, Kindles, and other tablet devices it won't be long before some lucky dude/chick sells 5 million copies of some hot new $10 ebook and garners a profit of $35 million.

Obviously, I should be directing my energies toward an ebook as well. After all, my little angry man/rant posts aren't at all monetizable. Perhaps it's time to get paid for the six years and thousands of hours I've put into teaching myself to write?
Posted by CaptiousNut at 7:32 AM

Look at it this way too. About 5% of the world's population is currently reading E-Books. Sooooooo, the market is literally untapped.

Write a twenty page e-book and sell it for a dollar on your blog, see what happens.

Your contribution to our thinking about home schooling has been extremely valuable. That area is ripe for new voices, and most of your material has already been written. Sort of an as-you-go-along guide.

I like your attitude, *just do it and see what happens*.

Thanks. Though one problem with my content is that it isn't organized at all. I'm trying to, among a million other things, create a *page* on this blog that neatly maps out my homeschooling posts.

For example, just the other day someone asked me to help convey to their wife what a typical day educating on the homefront was. So I sent him this link to pass on to his skeptical spouse.

All that stuff, the common arguments and demonstrations, ought to be in an easy to navigate form.

And, as you say, my content really is an as-I-go-along guide. After all, I've only been homeschooling for two years. I'm no expert or anything, yet.

Though you should see my daughter, zooming along at a faster pace than her precocious brother!