On Those Nutty Allergies 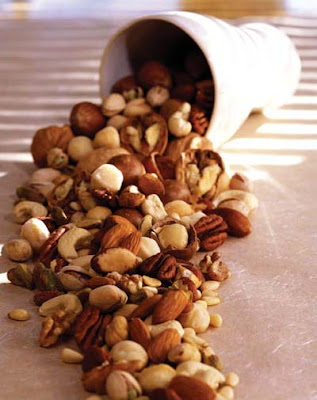 A week or so ago, when I was making my son a peanut butter sandwich for a late-morning boat ride at a friend's house....I noticed a bit of brown in the jar of peanut butter. I said to the young lady whose peanut butter I was using,

C-Nut - Is that chocolate or something in there?

Then I thought for a moment.

Thank God I noticed it in the jar AND thank God I didn't give that sandwich to my son when we were out on the ocean in a slow-moving sailboat for lunch.

You see, the 5.53 year old Prince is allergic to nuts (and sesame). He can eat peanuts but not the other category (tree nuts) which would include the hazelnuts in Nutella. How bad, how traumatic would that have been for my son to have an allergic reaction while we were stranded out on a boat? We've never had to use the epi-pens, thankfully, and have probably gotten a little lax in making sure we have one on us at all times. So there was a good chance that I wouldn't have even brought one aboard with me.

Like I said, thank God I noticed the Nutella when I did.

But let this post also serve as a warning to those of you who ever have allergic kids under your care. Most people use the jelly knife for peanut butter as well. And once that knife has gone back and forth the jelly has been cross-contaminated. Ice cream, with all its nutty varieties, is another candidate for allergen cross-contamination.

I myself have to carefully watch all this stuff because not only is my son allergic to nuts and sesame, my daughter is allergic to dairy, eggs, and peanuts - though I believe she's outgrowing the dairy/eggs restriction.

One last warning about sesame which is less talked about but is often coincident with a general tree nut allergy (I think). Watch the supermarket, or even deli bagels. They have sesame seeds flying all over the place. I inspect bagels thoroughly before letting my son have one. Also, forget Burger King. Although they will say they can deliver a burger with no seeds (using two bun bottoms or something), upon examination I found tons of sesame seeds embedded in the bread they gave me. Progresso bread crumbs are made with sesame - which is a bit of a surprise so watch homemade meatballs (pizza joints ALL make their own breadcrumbs). Hummus (or Hommos) has sesame concentrated within it. In fact, that's how we discovered our baby boy was allergic way back when. His mother let him lick a piece of hummus and pita and he instantly projectile vomited. The last food I'll warn about is those *wraps* that sandwiches are fashionable made in these days. Many, though not all, of them are made with sesame flour. Our son had a reaction to a wrap years ago when we were making a long trip somewhere on the New Jersey Turnpike.

Oh, and if you ever take a nut-allergic kid to get ice cream....ask the server to wash out the scoop UNDER THE SINK rather than in that little cesspool where they drop all the other scoops. AND lean in and watch them clean it!
Posted by CaptiousNut at 6:48 AM

Why are you feeding your brood BK in the first place? That "food" is terrible for them!

I have to show my colors again. It's the bread that is the worst part of the meal, at BK or anywhere. The meat, vegetables, salads are fine. Since you have given so much to enhance the development of your kids, you really ought to read up on the effects of wheat and other carbs. We need zero carbs to survive.

If you're interested, read Gary Taubes or Dr. Eades.

Only took them to BK that once. McDonalds is their 2-3 times a month indulgence.

Are you saying no pasta?

I am with you on the IT heritage, and have eaten a ton of pasta. My favorite indulgence is Uno's pizza in Chicago. Now, it's a once a year treat. No-one should quit eating what they like because somebody else said to. Educate thyself!