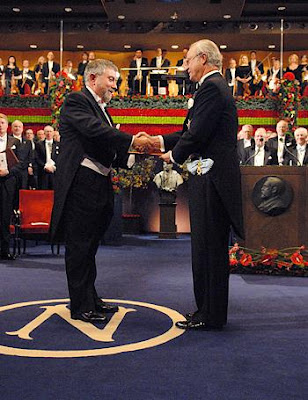 So I'm skimming a blog post that claims economist Paul Krugman *debunks* the idea of heavy government cuts as a way to economic recovery.

While Krugman didn't actually do what the blog author asserted....let's put that aside for a moment.

Morons and anti-Morons were arguing back and forth in the comment thread.

One particular mental midget offered up as his entire defense of Krugman that he *won a Nobel Prize* ergo he must know what he's talking about. (Next I'll have to take seriously the advice of *doctors* just because they went to medical school! Or government school teachers' opinion on education!)

Somebody countered that there's no such thing as a Nobel Prize in Economics.

Lo and behold, the anti-Moron fired back:

It's a later addition, not in accordance with Nobel's will. Tastelessly tacked on.

Hmmmm....I didn't know that. He's right, there is no official Nobel Prize in Economics.

Look, I've been telling people for I don't know how long - that macroeconomics is pure sophistry. There's just no way they can measure the aggregates they think they can measure; furthermore, the qualities of what they try to measure are changing all the time. Pure economics remains a fascinating subject to study but only so long as students steer clear of the junk, the propaganda, the Krugmans AND the Mankiws of that world.

So no matter what agenda a slimy pol promotes....he can be certain to attain the imprimatur of some Harvard quack!

Krugman, as a Marginalization target, is low hanging fruit. I've left fisking him to others from the get-go.

Krugman's problem is that he demonstrates complete ignorance when it comes to the most fundamental issues of economics: incentives. Incentives are often ignored in large systems because there is some inherent balance present. However, that balance only goes so far. The reason that it is okay to slash taxes on the rich to the tune of $1.3 trillion and yet it is not okay to spend $77 billion to extend unemployment insurance is because slashing taxes increase investment and leads to economic growth because it increases the incentive to work. Providing extended unemployment insurance does the exact opposite - it increases the incentive NOT to work. This is a fundamental fact that cannot be ignored. The other fact that Krugman fails to point out is that when taxes are lower, government revenue actually increases. The reason, again, has to do with incentives. If people are provided with incentives to work, there will be less "need" for unemployment insurance, more motivation to produce and earn more, and thus a net gain in tax revenue.

One last point - Krugman's error is summed up when he talks about "slashing benefits for those in need". Krugman believes that productive citizens have a fundamental duty to provide for people who are not productive, and that the needs of those people are valid claims on the wealth of others. That kind of attitude enslaves producers to consumers. It is undeniably immoral, and any philosophy that follows from that foundation is factually and ethically wrong on its face.

Posted by CaptiousNut at 8:17 PM

I, like you, used to think it was worth debunking everything Krugman says about economics. Then I realized, the guy believes in free lunches, and TNSTAAFL.

Ergo, I don't even bother anymore. Free lunch philosophy passed off as economic science is a good litmus test for whether a person should be taken seriously. If they support the idea that an action can be taken which is costless, they've put themselves in the "idiot box" as far as I am concerned and I don't feel a pang of guilt putting their protestations to the contrary on permanent mute.

Krugman, essentially, is a symptom of a larger disease.

Without a brainless sub-population, or aspiring socialist politicians....he'd have no standing.

Even if his tripe fills their empty skulls, I don't think he represents a primal cause.