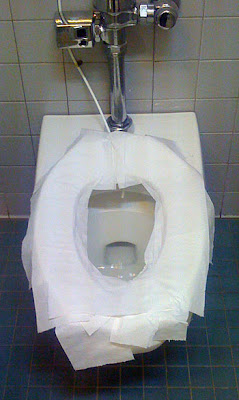 I was just thinking the other day how the above practice just can't at all be considered *green*.

Well, in a gender comparison, it can't at all be greener than the widespread male practice of depositing roughly 80% of their urine in a toilet/urinal, NOT flushing, and NOT washing one's hands! (Realize they only need to fill the soap dispensers in mens' rooms....annually.)

To counter propaganda such as - It's Been Proven - Women Are Greener Than Men - I'm going to put this *do you line the seat?* comeback on a developing list of my very own colloquial propaganda.

And if women truly are greener than men (I thought spitting out kids was destoying the Earth?), I think we ought to seriously look at repealing the 19th Amendment.

(At least one other nutjob agrees with me!)
Posted by CaptiousNut at 9:10 PM

My buddy Tom claims that there are "composting toilets" now, that they work and they don't smell at all. I am skeptical but also mildly curious. The idea sounds like a fascinating way to turn a bunch of useless shit into productive material!

I had my kids pee right in the middle of a packed Jones Beach yesterday!