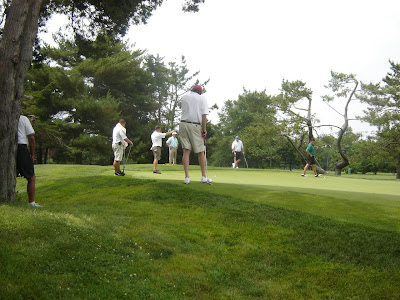 So I told y'all I was heading down to south Jersey to watch my GutterBuddies play in a competitive golf tournament.

Guess what, they won the whole shebang!

In the finals they beat this guy - Duke Delcher - a reputed golfer in this region who's made the quarterfinals of the US Amateur (losing to Joel Kribel in 1996), allegedly played in a US Open (I can't verify that), and starred on the 1997 victorious Walker Cup team - which is the amateur version of the Ryder Cup.

The 54 year old Delcher was awesome to watch. On the second day he and his partner were 5 down after 6 holes yet caught fire to win 2 and 1 anyway. His short game was in a whole other league.

But he was *no match* in the finals for my jabroni's who trounced him 3 and 2! As I told y'all last year....these guys are darn good.

Here is Delcher hitting one of his laser-guided wedges:

It was a fun, relaxing weekend *down the shore* for me: booze, some light golf practice, cheesesteaks, Alfe's, and a couple of Primo's hoagies - and seeing these long-time friends, who've dedicated YEARS to their golf games, win was a terrific bonus.

Next year, now that I'm geographically much closer....I hope to play in this tournament myself.

Now it's back to business on the homefront, unpacking boxes, homeschooling, carving out life in a new place, etc.

What's that stock market doing these days anyways?
Posted by CaptiousNut at 8:19 PM

Well Captain, I officially made my comeback Monday with my first three buckets in a whole bunch of years (my dad's telling everyone my first swing in 30 years, but I'm pretty sure that's not possible considering I'm only 26). But anyway, hopefully maybe I'll see you on a course in Florida and we'll see if we're both on a partner hunt for the spring so we can make a run at the jabroni's I love to caddy for! Great post.