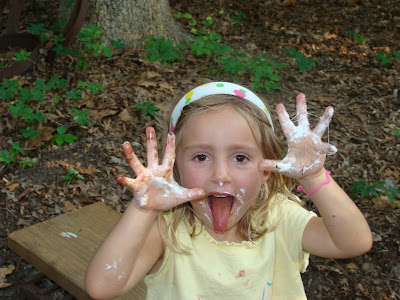 Recall we spent last week in the Hamptons. My kids wanted to have a campfire and do smores...

Already in possession of those new, huge, *toasting-size* marshmallows, I go to the local supermarket out there and buy a 6-pack of Hersey's bars, a box of Graham Crackers, and a bag of lemons (for lemonade).

What did each item cost? Well, I'm on *holiday* so it doesn't matter. What, am I going to tell the kids that we can't do smores because the ingredients are too expensive?

I ring it up at the self-checkout and the bill for these mere three items comes to $13.54.

What? I faintly recalled seeing *two prices* under the chocolate bars; and tiered pricing on the Graham Crackers as well. I guess they weren't on sale explicitly.

"Do I have to have one of those cards?", I hollered over to the clerk nearby. She responded in the affirmative and quietly swiped her Waldbaum's card through - but only because I sought her out and asked.

So there you have it....a 50% extra smore's tax on out-of-towners or anyone else thoughtless enough to not beg a cashier to swipe their card.

At most stores the clerks will reflexively swipe their card for anyone without one. But there are a few out there (e.g. Harris Teeter down south) where it seems like a matter of policy to....to tax unsuspecting and/or forgetful Morons.
Posted by CaptiousNut at 11:46 AM

Email ThisBlogThis!Share to TwitterShare to FacebookShare to Pinterest
Labels: food, the hamptons

Don't you know, that is why we call it "Harris Cheater" :)